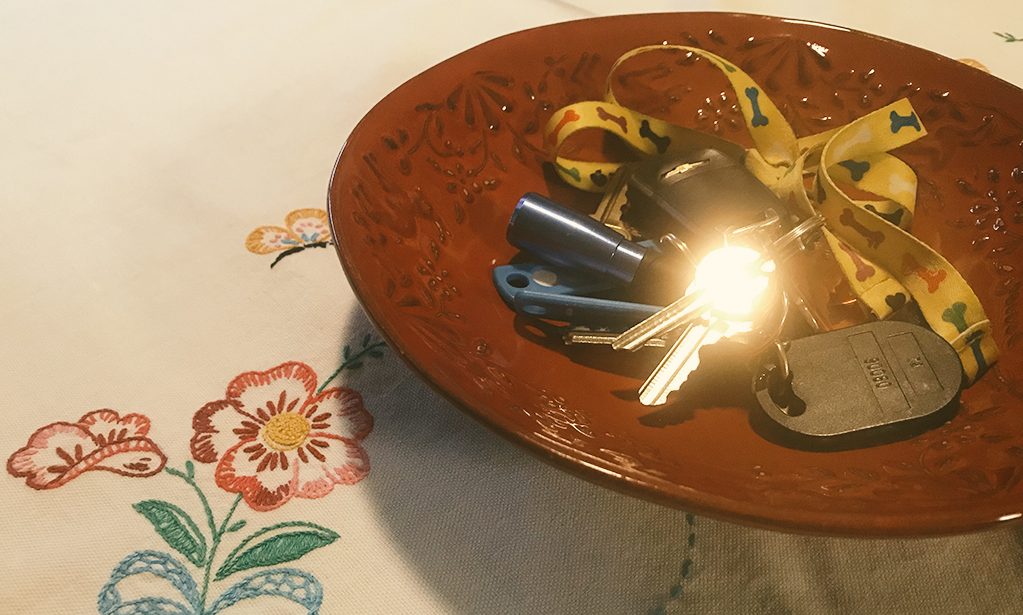 I don’t like leaving my office during the day.

First of all, it’s South Georgia in July.  So, I may as well be living on the surface of a very humid sun.  For example,  I straightened my hair this morning before work.  Then, I walked the dog which took all of about seven minutes.  I put Paisley back inside, grabbed my keys and purse and just happened to catch a quick glance of myself in the reflection of the oven door.  Roseanne Roseannadanna has nothing on me.  Ponytail it is!

Secondly, once I’m where I’m supposed to be, I really just want to stay there.  Maybe it’s laziness?  I am not enthusiastic about racing across town for any reason.  Much less, racing across town and then trying to get back on a lunch break.  I just don’t function well under that kind of pressure.  I like to know I have time to browse.  I’m a more casual observer than race-arounder.

Additionally, my cubicle is air-conditioned.

The boys are spending the week with their Atlanta grandparents.  One last hoorah for them before the reality of back-to-school schedules and jam-packed weekends begins.  Jamie took the boys to his parent’s house and spent the night.  So, last night I had the house to myself.  Any other time of the year, I would look at having the house all to myself as a boon.  A blessing.  An unexpected oasis of quiet in the midst of the gale-force winds we call our lives.  However, this summer has been different.

The boys have been busy and away from home more than usual.  Jamie has traveled more for both work and pleasure.  In short, I have been home alone way more than is typical.  At first, it was big fun.  I watched garbage on Netflix.  I ate popcorn and drank red wine for supper.  I indulged in ice cream straight out of the pint.  In the living room.  Using a serving spoon.

As the opportunities for being alone at home have continued to present themselves, I’ve discovered that when no one is home to distract me, I am highly unmotivated.  Highly.  This isn’t healthy long-term.  There are about 1000 things I should be doing, but when the boys aren’t there to watch me labor under the burden of all my chores, I just don’t care as much.  Jamie says it’s because I do better with an audience.

Last night, Jamie called from Atlanta.  Colin had just had his bath and put on pajamas when Jamie realized there was no Zyrtec in the toiletries bag I packed.  “I guess you forgot it, babe.  Looks like you forgot his prescription medicine, too.  So, if you could just FedEx all that to us tomorrow, that would be great.”  He sounded like that boss from Office Space that is insistent on those mindless TPS reports.  I rolled my eyes.

That’s how I ended up in the Walgreens parking lot mid-day in the sweltering heat with frizzy hair and a surly attitude.  Also of note, I was driving my parent’s car because our “Little Red Car” was in the shop.

Little Red Car has been in the shop for about three weeks now.  First, we were told it was a carburetor problem.  Then, it was rumored there was a possible alternator issue.  Now, it looks as though the diagnosis is a total engine failure.  I was pretty sure the mechanic was about to start calling for ransom.

The car, a four-door Pontiac vibe, was bought as a commuter car when we lived in Washington, DC.  It has given us very little trouble through the years.  Plus, it’s paid for, so the joke is on the mechanic.  There’s almost no amount we aren’t willing to pay to get that car fixed.  Almost anything beats having two car payments.  Luckily, Mama and Daddy don’t mind letting us borrow one of their two cars in the interim.

Because I was going to be only a handful of minutes in the drugstore, I left everything except my wallet inside the car.  I locked the car door and in doing so, thought it odd that I had to lock it from the inside.  Their car uses a fob with no real key, just a little palm-sized remote that controls – oh, you know – everything.

That’s typical; I smirked to myself while huffing across the parking lot.  Daddy doesn’t jee-haw with technology.  Never has.  Of course, the battery inside the fob is dead, I eye-rolled.  Poor Dad, he probably hasn’t even noticed.

Mama says Daddy was born old.  He likes oil lanterns, quill-pens, ink in an ink-well.  He’d rather read a book than watch television.  He prefers home remedies to modern medicine and would rather write a letter than talk on the phone.  He equates modernity with a loss of civilization.  When we were kids, he couldn’t stand our listening to the radio in the car.  What we were listening to wasn’t music.  It was noise.  “Racket,” he called it.  So, he bought a car with no radio at all.  Then, he typed the word SILENCE in all caps, enlarged it on a copy machine and taped the word to the big blank space in the dashboard where the radio should’ve been.  If we needed noise in the car, he would rather we sing.  You can imagine how happy this made two teenage girls.

I stomped into Walgreens in an uncharacteristically grouchy mood, where the super cheerful attendant greeted a pouty and frustrated me as I speed-walked back to the allergy section, grabbed the Zyrtec, paid at the register only murmuring a thank you, and speed-walked back out to the car.  I still had to get to FedEx, grab a bite of lunch, and get back to the office.

When I got to the driver’s side door of the car, I stopped and had a split-second of agonizing recognition.  I stood at the locked car door and knew, without even trying the fob that I was locked out.  Phone, purse – everything was inside.  I could see the heat radiating off the pavement.  Little wavy lines in the distance that meant my hair was expanding as I felt sweat rolling down my back.

I was immediately embarrassed I’d not been my usually chatty and chipper self to the fellow at the checkout.  Now, I was going to have to ask him a favor.  I could feel the sweat bead at my waistline.  Gross.  Double gross.

I marched back inside Walgreens without any idea what I was going to do.  Jamie was in Atlanta.  My parents were out of pocket.  Ginny works two hours away.  I figured I’d have to call a co-worker.  So, I explained my situation to the super-friendly cashier and asked if I could borrow the store phone.

He looked at me the way our dog does when he is trying to communicate something important: head cocked to one side, eyes big, mouth pulled into a compassionate semi-smile.  “May I see your key, ma’am?” he extended his hand.  My eyes narrowed.  I wasn’t sure if he was condescending or not but thought I’d take a chance.  “I reckon so, but I think the battery is dead inside the fob.”

He took the fob, nodded and said over his shoulder, “Hey Mike.  I’m gonna run outside and help this lady open her car door,” he motioned toward the exit, “My mom has a car fob like this, too.”  The minute I heard those words, I had a flashback.

I remembered working at WalMart one Christmas vacation when I was home from college.  An older lady with a grey bun pulled neatly away from her face, readers perched on the end of her powdered nose came through my checkout line and explained she had wanted to buy a table-top Christmas tree that we had on display, but didn’t think she’d be able to put it together by herself.  I cocked my head to the side, eyes big, mouth pulled into a compassionate smile and told her if she’d come back later in the day, I would put together for her and decorate it on my lunch break.

The super-friendly cashier had used the same sort of comforting tone with me!  AS we walked out to the car, I knew what was happening.  He was too confident for someone who was going to simply “try.”  He knew how to get into the car.  It was something obvious.  Something simple.  HE WAS GOING THE EXTRA MILE FOR A CONFUSED OLD LADY!

The closer we got to the car, the more embarrassed I became.  It was a new-fangled walk of shame – embarrassment mixed with resentment and yet, at the same time, appreciation – but begrudging appreciation.

As I took the key fob in my hand, I felt it.  It was a shift.  A tiny earthquake.  I was no longer the helper. I was the helped.  New-fangled technology had outpaced me.  Suddenly, I was Blanche in “Streetcar Named Desire,” but with frizzy hair and sweatstained linen standing in a Walgreens parking lot.  I was equal parts grateful and embarrassed.

Once I cooled off in the car, I called Daddy.  He laughed a big, hearty, felt-down-deep laugh.  He advised me to brace myself, for it is only the beginning.  The way he figured, it was inevitable I’d be outpaced at some point.

“I should’ve told you about that key.  If you don’t know how to work that blame fob, you’d never find it,” he said with a great, big smile behind his voice and what could only be sympathetic eyes.