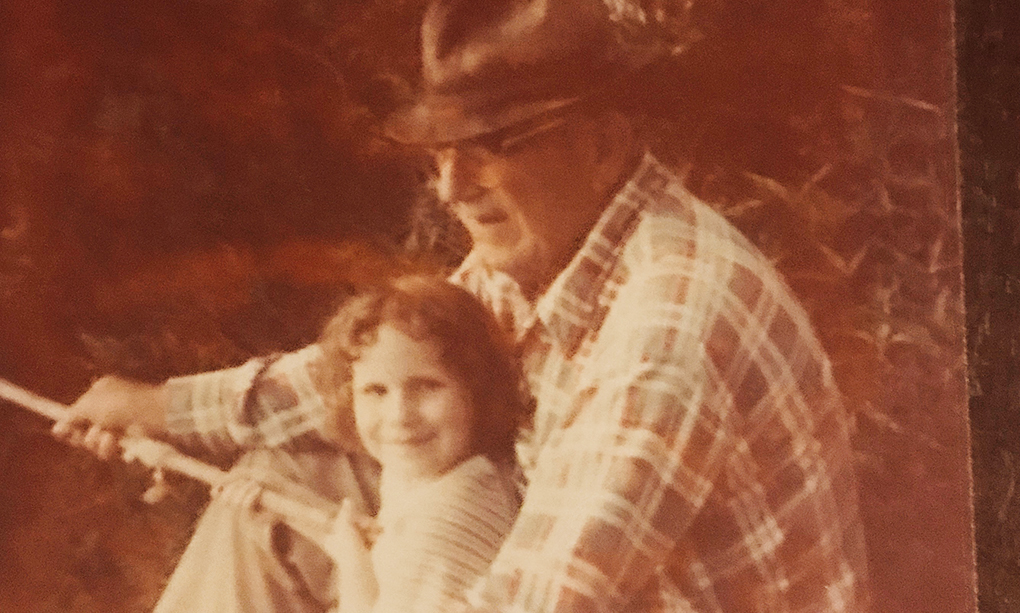 When Nanny and Pops went to the camp, they most always took me.  Pops built the camp in 1961 on a shady lot on the banks of the Itchuaway-Notchuway Creek in Baker County, Georgia.  It was a joint purchase between Pops and four of his siblings, but he constructed and wired the house himself.

By the time I started going fishing with them in the early 1980’s, Pops had bought out his siblings, and the house had fallen into some disrepair.  It sagged a little. The bathroom toilet was tricky. The refrigerator had rusty racks. Time and age had taken their toll, but Nanny and Pops didn’t seem to mind.

On Friday afternoons in spring and early summer, we three would pile in the blue farm truck and head for the creek.  The blue truck had a dent in the driver’s side door, a bench seat, no radio and no air-conditioner, only manually-controlled air vents in the floorboard.  It smelled like the inside of a rusty toolbox, motor oil, and hot plastic. I’d sit in the middle, and if I had on shorts, by the time we got to the camp the backs of my legs would be sweaty and stick to the seat.

Pops didn’t drive much by then, but he always drove to the camp.  Once I was old enough and we pulled onto the canopied, red-dirt road, he would put the truck in park and without a word walk around to the passenger’s side, slide Nanny to the middle, and let me drive the rest of the way.

The house was long-faded green with white trim, peeling and cracking from sun damage.  Stone steps and a small front porch provided the entrance into a shared living room and kitchen space.  The screen door squeaked our arrival, and Nanny would hold it open with her hip to unlock the heavy, padlocked, wooden front door that when opened produced a haunted house creak.  A rush of hot, stale air scented with years of old chimney smoke greeted us. All windows were slid up and propped open with sawed-off broom handles, and the heavy wooden door that opened out to the back porch was un-padlocked to “catch a breeze” and “air out the house” before I was allowed to run play.

The shared kitchen and living room had a red and brown square mosaic pattern on the linoleum.  It was worn and torn in places, but I thought it was pretty. I’d run my index finger over it, tracing the looping, symmetrical pattern.  The creek rock fireplace hadn’t been used in years and had a piece of plywood propped against it to cover the hole. There were always chimney sweeps squeaking and flapping inside.

The back porch was the most comfortable spot in the house.  Facing the creek and running the span of the house, it was well-shaded almost built into the tree line of the creek bank.  We could hear the creek roll and stumble and talk to us from there. It was built off the ground on smooth, round, thick poles I couldn’t quite wrap my arms around.  Pops would sit out there until late in the evenings, and I would sit at his feet and read or color or chatter like a little bird, with him “umm-hmming” in response.

In the cool dirt and sand beneath the porch, there was room to play.  I would squat down, my red leather sandals already dusty, and with a torn piece of leaf or a thin stick, trace around the sandy edge of one of a hundred silver-dollar sized holes trying to conjure the elusive doodlebug, “Doodlebug, doodlebug, fly away home.  Your house is on fire, and your children are gone.”

The camp had four bedrooms and a half-bath, but one of the bedrooms stayed locked. It belonged to a niece named Mary Alice who lived in Texas and refused to sell Pops her portion.  So, Nanny kept the bedroom door locked and no one was allowed to open it because it wasn’t ours. I always pictured something magnificent and slightly spooky inside. I was disappointed when I was finally able to pry open the door enough to spy a modern-day version of Miss Havisham’s banquet room.  I quickly closed the door and never told anyone I’d peeked.

Pops had his own room with twin beds.  Nanny and I shared a double bed in her bedroom.  She had a light-pink chenille bedspread that I’d lie across until the little fabric knots made patterns on my cheek and the tops of my thighs.  The only television in the house was in her bedroom, a small black and white with rabbit ear antenna that picked up one channel on a clear night.  We only turned it on for the 11 o’clock news, but if I were persuasive enough, Nanny would stay up with me to see if there were any dogs doing tricks on The Tonight Show with Johnny Carson.

Nanny packed food for our overnight in a plastic dishpan: sandwich makings, Raisin Bran, a half-gallon of milk, Vienna sausages and sardines, a gallon of sweet tea poured in a clean, recycled milk jug, and as a special treat:  Club crackers with homemade buttermilk ranch dressing that she stored in a recycled, clear plastic Mrs. Kinser’s pimento cheese container. I have only ever dipped Club crackers in ranch dressing with Nanny. It doesn’t taste the same with anyone else.

We would eat supper gathered at the kitchen table on Friday night, and wake up early Saturday morning to go fishing.  Pops would be up before Nanny and me. HIs whistle from the kitchen meant it was time to go. After a quick bowl of cereal and a cup of Sanka each (black for him and Sweet ‘n Low for her,) we were off.  They kept an old, mossy-pea green painted Jon Boat with a small outboard motor pulled up and tied off on the bank. Pops painted everything that green color: his ladder, a birdhouse, a toolbox. Daddy said it was because he only bought the one gallon of paint and wouldn’t buy another one until that one ran out.

We fished with bamboo poles and crickets, only sometimes a rod and reel.  I liked putting crickets on the hook. I was good at it, and it made me proud when Pops would click the inside of his mouth, smile, and nod at me – his way of telling me I did a good job.  He liked that I wasn’t squeamish, and I didn’t ever want to disappoint Pops.

Nanny fished with crickets too, but she also made bait:  flour, salt, and water warmed to a doughy paste on the stovetop.  When the dough was the right consistency, we added shredded cotton balls.  The cotton balls kept the dough together underwater. I liked helping her shred the cotton and massage it into the thick, warm dough.  My mouth would water from the smell, tantalized by something I couldn’t have. Out on the water, she would squeeze the palm-sized ovals around her fishing hook and up the line, but until then, they were stored in a recycled Country Crock margarine container.  It wouldn’t take long to find out if she’d made a good batch because they’d either hold up or disintegrate. If they didn’t hold up, she’d be forced to switch to crickets, slinging the container of unused dough balls into the dark creek water where they would float on the surface a while before sinking.

For those times we couldn’t get the outboard motor to start, Pops had a poured concrete landing and set of stairs down to the creek.  It was shady and cool on the creek-side. There was a big tree at the edge of the bank with bark that peeled off in papery sheets. It’s a type of birch tree, but I called it The Paper Tree and peeled the bark off the trunk and its branches like dead skin off a sunburned shoulder.  Sometimes, Pops would let me sit between his legs to fish. He could fish with his right hand and have his left ready to catch me if I tipped too close to the water. He wore enough citronella behind his ears for both of us.

Most fun, though, was to take the boat.  Pops got in first to crank the motor and drive.  I would sit in the middle on top of the live-well and Nanny sat at the front.  I loved the fishing with Nanny and Pops: the creek mud and clay, the cobwebby-dirt smell of my old orange life jacket, the sunshine on my shoulders and face, the sticky feeling on my toes from the water that sloshed into the boat as we went along.  I put my fingers over the side, just skimming the water enough to make a wave. Nanny didn’t like it when I did that, but she didn’t always make me stop.

When fishing was over and we would get back to the camp, Pops would put any carp we’d caught into a Styrofoam cooler to give away before we got home.  The bream were ours for supper, and Pops and I would clean them while Nanny readied the camp to leave.

Ancient sawhorses holding a weathered piece of plywood were set up under some trees at the back of the camp for cleaning fish.  After he’d behead them and gut them, I would scale them. They were beautiful: dark brown and black scales with bands and flecks of iridescent purple, green and indigo, sometimes red-bellied.  When we finished, I’d put the still-moist scales on the backs of my hands and pop them off after they’d dried, leaving little semi-circles on my skin.

We would wash up outside, load back up in the blue truck and head back to their house for supper.  Nanny would make hush puppies and sometimes French fries, always coleslaw or potato salad. Pops and I liked to eat the crunchy fish fins.  Nanny liked the bready roe.

The camp is long gone now.  Nanny and Pops sold it after Pops’ health didn’t allow for fishing anymore.  During the flood in the early 1990’s, the house was washed off its creek rock foundation and into nothingness.  Nanny and Pops are gone now, too.

There is a paper tree at the edge of my office parking lot.  It called out to me my very first day of work.  Not too long ago, I took a minute and peeled some of the paper off. I didn’t do anything with it, just wanted to hold it in my hand and run my fingers over it for a little while.  It made me think about muddy water and iridescent scales. If I allow myself to, that paper tree at the edge of the parking lot, so far removed from summers with Nanny and Pops, lets me smell citronella on the warm summer breeze without even closing my eyes.