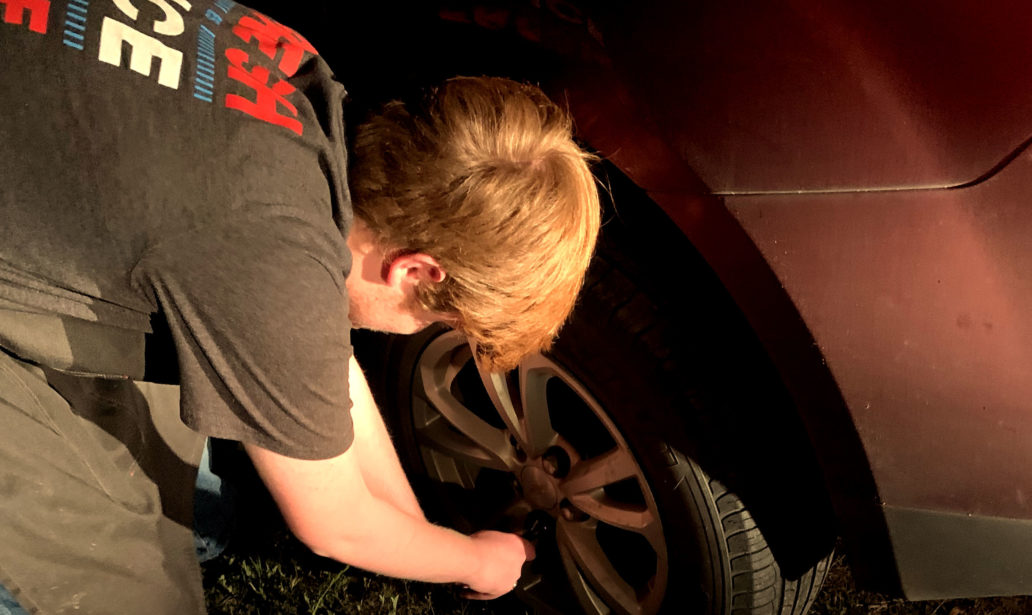 It was the late afternoon of my very first date. Living as far away as we did from any restaurants or movie theatres, my high school sweetheart and I learned that to go anywhere and make it back home in time for my 11pm curfew, we had to leave early. Daddy may have had rules about what time I had to be home, but he never stipulated the time I could go.

We were on the way out the front door when Daddy said, “Oh, Elizabeth, before you go, let’s go over how to change a tire.”

“Well, there’s no better time. The way I see it if you learn how, there’s no reason for you ever to be late,” he reasoned.

My date tried with a helpful offering, “Oh, Mr. Kent, don’t worry! I know how to change a tire.”

Daddy was already walking to the back of our family car to pop the trunk, “You do? That’s great! Then, you can help her if she needs it.”

I’m sure I rolled my eyes. I also learned how to change a tire.

Jack started a part-time job in Thomasville about a month ago. On Sunday night, Jack had already texted us that he was on his way home after leaving work around 9pm. I was folding laundry, and Jamie decided to go ahead and take his shower, leaving his phone on the side table.

Not too much later, Jamie’s phone rang. Usually, I’d just let it go to voicemail. This time, though, I walked over and answered when I saw it was Jack.

“Mama, hey. Everything is fine. But, an animal jumped in front of the car. I hit it, and now my tire is – oh yeah – it’s going flat. What do I do?” I could feel everything tense. Before he’d stopped talking, I’d already barged into the bathroom where Jamie was mid-shower.

Unlike most married couples I know, Jamie and I have always preserved bathroom time as sacred. I don’t bother him when he’s in the bathroom, and even when the children were small, nobody bothered me. It’s been a lovely system.

I didn’t care. I opened the door and marched straight in, “It’s Jack. He’s had a flat tire. I’m leaving.” Jamie had shampoo piled high on his head, water streaming down his face. Blind without his glasses, he squinted at me through the shower curtain, “Wait. Wait. What did you say?”

I was holding the phone high in my right hand and gently shaking it for emphasis, “This is Jack. He has a flat tire. I’ve got to go,” I spoke in short sentences as I pulled off my pajamas and threw on real clothes. “Elizabeth. Take a breath,” Jamie shouted through the streaming water of the shower. “This isn’t a crisis. What happened?”

Not a crisis? Not a crisis? My red-haired baby boy was stranded in the dark in the middle of nowhere. My eldest. The one who called crayons “B’s” until he was two. The baby who woke us singing from his bassinet. My tiny, precious baby boy was in DANGER.

I didn’t wait to try and reason with my husband, Prince of Nonchalance. King of Don’t Panic. Duke of Don’t Freak Out. If he couldn’t see danger, I wasn’t going to point it out.

I grabbed the keys, shouted, “I’ll call you when I get my hands on him,” and ran out the front door, leaving Jamie’s phone on the kitchen table.

In the darkness of the car, I decided to take deep breaths. Jack was safe, after all. I called Jack. “Hey. I’ve been thinking this through. You need to pull the car totally off the road. Try and find a spot like a driveway or a parking lot – somewhere we can try and change the tire and not be in the roadway.”

“Ok. I see a little field road. I think I can get it there without too much trouble,” Jack sounded frustrated. As the mother of a teenager, I knew that I couldn’t overreact, or any street-cred I would get for changing this tire would be ruined.

“Once you get into position and you know you’re safely off the road, turn off all your lights and wait for me. I’m coming,” I was reassuring – just in case he was scared. He was not.

All I could picture were toothless, dirty serial killers pulling up behind Jack’s car in a ploy to help him. The escaped convict with a hook for a hand was waiting in the bushes right by Jack’s disabled vehicle. I just knew it.

I called him back and, in a super-chill voice, said, “Hey. Let’s go over some scenarios, ok.”

I continued super-duper chill. “Yeah, it’ll make me feel better. Listen, it doesn’t matter who might stop to help. Your response is ‘No, thank you. Help is only about a minute away. I appreciate it, though.’ That’s all you have to say. Don’t get out of the car. Don’t roll down your window. Even if it looks like a sweet, little old man, you sit still. The little old man could be a ruse to get you out of the car so that his super-strong co-partner in crime can hit you over the head with a club.”

“A club, Mom? First off, nobody’s going to stop. I mean, it’s pitch black dark. I don’t know how they’d see me. Even if they did, I doubt they’d use a club.”

I could hear from the tone of his voice that I was beginning to lose any credibility I’d had. Bless his ignorant, naive heart. He has no idea the number of club-wielding marauders out there. “Ok. Just sit still. I’m close,” I hung up again.

A few miles later, the phone rang. It was Jamie. “Um, hey. I was thinking. It’s late. Just pick Jack up and bring him home. We can deal with the car and the tire tomorrow,” he had decided.

Well, I wasn’t letting him decide. Especially not when he had remained inside a hot shower at a moment of crisis while I dealt with emergency all alone.

I channeled my very best Nancy Sanders, “Listen, I’ve been waiting 30 years to change a tire. Besides, Jack says he’s pulled off into a safe spot well off the road. I’ll decide what I’m going to do once I get a look at what I’m dealing with. Either way, I’ve got this handled.” Long pause. “How was your shower?” I sneered.

“Oh. Nice. Is this what we’re going to do? This isn’t an emergency, babe. It’s a flat tire. Relax!” we became disconnected rather suddenly.

Jack was in the best spot ever for tire changing. He’d pulled into a little dirt field road, well off the beaten path, perfect for changing a tire. He was right. I don’t think anyone would’ve seen him if they hadn’t been looking.

It was a beautiful night. The stars were out. There was a cool breeze. I broke a sweat, but only because I was trying to hurry. It was a school night, after all.

I showed Jack, just like Daddy showed me, how to get the lug nuts off and use the jack. It only took us about 25 minutes from start to finish. Jack followed me as I drove the car with the spare tire back to our house.

After we told Jamie about our adventure, and Jack had gotten in the shower, I asked him, “Why didn’t you come tearing out of that shower to go help him? Why did you ask questions and stay calm and let me handle it all by myself?”

Jamie smiled and said, “I never doubted for one second you could handle whatever you found when you got there. You’ve wanted to change a tire since your Daddy messed up your first date. Besides, I figure if anybody is going to save-the-day, it can be you as easily as it can be me.”

It was as nice a compliment as I’ve ever had.

I didn’t tell him about the serial killer.