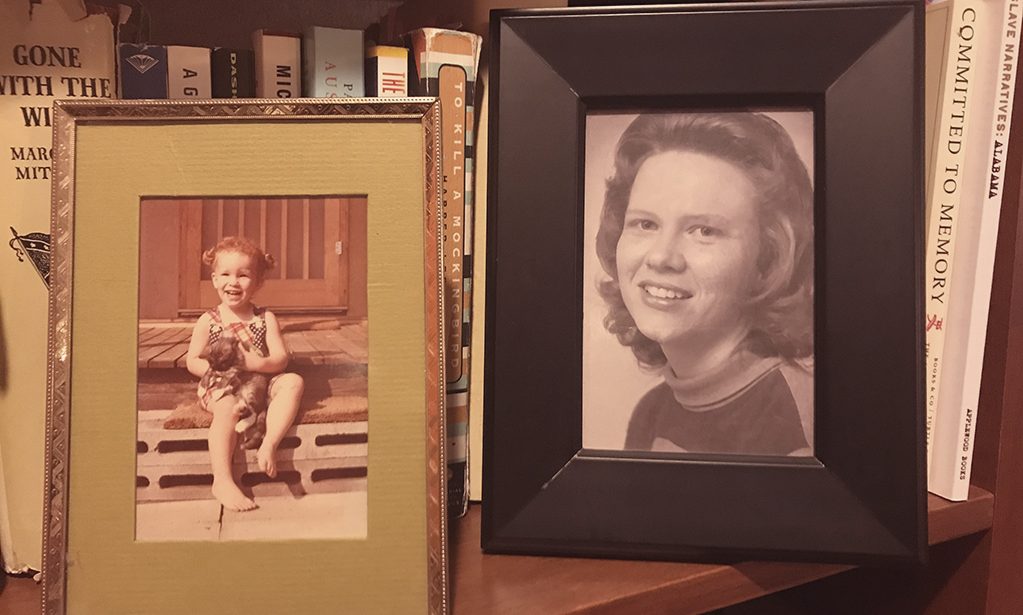 Once when I was working a temp job in LaGrange, a co-worker remarked that my childhood sounded like an episode of The Andy Griffith Show.  He was right.  It really was. Mama and Daddy did everything they could to make it so.

In the field adjacent to Nanny and Pops’ yard was a fire-tower manned by Mrs. Irma Collins.  Miss Irma climbed the seemingly innumerable flights of stairs up to the tiptop of the tower, where she watched, mostly in the late spring and early summer, for forest fires.  She carried a small cooler with her lunch inside and not much else. It was rare that she came down from the fire-tower until time to go home.

Trucks run awfully fast on the highway that separates our house from Nanny and Pops’.  So, most of the time, Mama would walk me to the road where Pops would be waiting on the other side.  If Miss Irma was working in the fire-tower though, I was allowed to cross the highway by myself, only after calling to her as a lookout.

Standing on the edge of our yard, I’d call up to the little office at the top of the tower, “MISS IRMA?  MISS IRRRMMMAAAA??” She’d stick her head out the window, look up and down the highway for me and shout back, “Go ahead Little Un.”  I’d run across the road to Pops waiting on the swing in the front yard.

Admittedly, it was a charmed life.

Before I started Kindergarten and before Ginny was born, I had lots of uninterrupted time with Mama.  She read books to me. We hung clothes on the clothesline together. Mama taught me how to iron pillowcases and dishcloths so I could “help” with the ironing.  She showed me how to wash hairbrushes, so I’d stay from underfoot while she cleaned our bathrooms.

We raked magnolia leaves into piles for burning in the driveway.  We watered flowers on the screened in back porch. Sometimes went on walks, when it wasn’t too hot.  Once, she made me a wreath of clover for my hair like the illustration of Heidi on my storybook.

She taught me how to roll out a pie crust, almost always leaving a small section of the crust for me to bake in the oven on top of my own tiny pie.  Sometimes, she would let me help make pudding on the stove, which we would spoon into special parfait glasses that she had gotten as a wedding present.  Then, we’d put the filled parfait glasses in the refrigerator to cool and eat them as a special dessert with Daddy after supper.

Every two weeks or so the Bookmobile came from the Desoto Trail Regional Library in Camilla.  On the morning they were to come, I’d stand at the living room window and watch for them, dashing out the front door as soon as I saw the big bus lumber into view.  Eagerly, I’d climb up the steps to greet The Bookmobile Ladies. I had favorite books that I chose almost every time, but Miss Joyce and Miss Wylene always had lots to choose from.  The Country Bunny and the Little Gold Shoes, Strega Nona, The Mango Tooth, and Dan Frontier were all-time favorites.  Each book had its own distinctive smell: some like cleaning spray, others like cold salt.  The Wee Little Man smelled like mimeograph paper.  Very rarely, The Bookmobile Ladies would let me ride with them down to Aunt Sallie and Uncle Riley’s house.  I would sit in Miss Joyce’s chair as the Bookmobile crept down the narrow paved road and up the steep driveway into Aunt Sallie’s yard.  Mama would follow behind in our car and after a quick hug from Aunt Sallie, I’d jump in the car with Mama, and we’d come back home.

Most Wednesday’s, Mama and I went to Camilla.  Our first stop was Mr. Twitty’s Feed & Seed on Broad Street.  Mr. Twitty’s store had a heavy wooden door with a screen door in front.  Usually, the wooden door was open wide into the store. Folks entered off the sidewalk through the screen door with a distinctive slap announcing their arrival. Trays of zucchini, squash, and cucumber plants were rolled onto the sidewalk on either side of the doors where they basked in the partial shade under the store awning.  Most times, there were plastic planting containers of purple petunias, begonias, or geraniums out front, too. I could smell the fertilizer before I walked inside.

Mr. Twitty was tall, with a shock of white hair and a sideways smile.  He looked at me through wire-framed glasses from behind a wide, worn, wooden counter on top of which sat an old cash register like the ones I’d seen in Western movies.  The store’s wooden floor provided my red-leather sandals a satisfactory slap-slap-slap as I walked straight to the big, wooden seed bins right in the middle of the store.  I loved plunging my hands deep into the seed bins, listening to the seeds splat-splat-splat back into the box in quick succession as I’d let them fall back into the bin before plunging my hands in again.  Mr. Twitty’s black-and-white Boston bulldog, Tippy, had been conditioned to come investigating when he saw Mama and me, for Mama let me bring Tippy special treats: small bites of cheddar cheese or a cold hot dog sliced into bite-sized pieces, a leftover piece of cinnamon toast from our breakfast. Sometimes, Mama would buy some seed packets or a six-pack of petunias, but mostly we stopped in to say hello.

After Mr. Twitty’s store, we would walk down to City Jewelry to visit with Mr. and Mrs. Taylor.  City Jewelry was air-conditioned and smelled like the clean packaging from inside a fancy gift box.  There was a glass showcase in the very front of the store that displayed pearl earring and necklace sets, gold crosses on thin gold chains, sterling silver cuff links.  Glass showcases formed an open U around the store walls and held all sorts of treasure: bridal sets with diamond engagement rings, watches, rings with birthstones of peridot, garnet, and aquamarine.  On the left side of the store, close to the window were display shelves that held five-piece place settings of bridal china. Featured brides had their wedding invitations or announcements from the paper framed and positioned in front of their chosen china pattern. I thought it was very romantic and fancy.  Picking out china that you’d use after you got married held a child-like mystery of romance and promises kept. Even the names sounded fancy, dripping with the sounds of somewhere far away: Lenox, Wedgwood, Spode.

The cuckoo clocks that hung on the opposite wall were my favorite part of the visit. Only once, maybe twice, did Mr. Taylor stand from his office in the back of the store, take off his magnifying headband visor and ask, “Would you like to hear them?”  While I stood watching, Mr. Taylor wound all the clocks to the hour and forced them to cuckoo just for me.

We saved the best for last, the DeSoto Trail Regional Library.  I loved everything about the library: The cold blast of air that greeted me when I ran inside under Mama’s outstretched arm holding big glass door open, the white, white, white of the tiled floor, the hum of the lights, the hushed whispers of grownups and other children.  I ran straight back to my section to look for books. Mama walked behind, usually in her red wrap-around skirt and brown leather sandals. I don’t ever remember her telling me to hurry. She never told me it was time to go. She never fussed at me for picking out too many or too few books.  She just let me be.

While Mr. Mitchell pulled out the due date note cards from the back of the books in my stack, he and Mama talked about books they’d read or were reading, authors of interest, poets and poems.  Sometimes Mama checked out a book or two. I liked Mr. Mitchell’s eyebrows, like wiry, unruly salt-and-pepper caterpillars, that peeked over the frames of his glasses. He had a deep, friendly voice and a warm smile.  Sometimes, if The Bookmobile Ladies were in the back, he would let me go hug their necks.

When Mama and I got home, she would make us fresh tomato sandwiches with mayonnaise, salt and pepper on white bread with slices of cheddar cheese or half an apple for us to share.  After lunch, if Mr. Roger’s Neighborhood hadn’t come on yet, I’d go outside and lie down in the swing to read. The familiar, rusty squeaking of the swing forcing heavy eyelids shut – almost.

It wasn’t until years after we had moved back home, that I thought to ask Mama why we would go on those little outings to Camilla on Wednesday’s.  Mama surprised me when she answered, “Because they kept me from losing my mind.” I had no idea.

If things work the way they’re supposed to, it isn’t until children are older, much older, that they learn the why’s and how’s of their childhoods.

Mama and Daddy aged 29 and 31, moved to Elmodel, across the road from my grandparents, when I was about a year old.  They had been married only about a year and four months. Mama had her degree in teaching but wanted to stay home with me until I could go to Kindergarten.

Most of the women in the community that were Mama’s age worked, too, either in the fields or farrowing houses with their farmer husbands or at the Department of Family and Children’s Services office in nearby Newton.  That left Mama alone with me on Morgan Hill.

Her closest neighbors were my grandparents, who lived across the street, and Aunt Linnie and Uncle Henderson, and Aunt Sallie and Uncle Riley Burch who lived within walking distance down Rentz’s Bridge Road.

She was young and new at being a wife and mother.  She was lonely. She was new to the area, too, a transplant from Alabama.  Mama used to tease Daddy, “You had to go out of state to find a girl to marry that you weren’t related to somehow.”

Looking back through the rose-colored glass of my childhood, almost all my memories are tinted in sunshine and safety and enormous, ridiculous amounts of total and complete unconditional love. There was no dischord in my childhood because my mother didn’t show it – for better or worse.  In the reality of my childhood day-to-day, she was my playmate, my comforter, and the one who held my spotlight.

What I thought were fun little forays to Camilla on Wednesday’s were days to which she looked forward.  Her unspoken efforts to reach out, make friends, establish a routine.

As I head into my 44th summer, I daydream more and more often about the woman in the red wrap-around skirt and brown leather sandals.  Did she miss teaching when she was staying home with me? Would Nanny and Pops have babysat me if she wanted to work? When did Morgan Hill start to feel like home?  Some questions I don’t think I want to be answered, some questions she would probably refuse to answer, some answers are just none of my business.

It takes a long time for a daughter to see her mother as a woman – separate and apart.  Some days, I can easily see Mama for who she is without Daddy, Ginny and me. Some days, I can’t.  I’m still learning how. It’s an intuitive thing, this unraveling of the chord that bound us together.  I’m not in any hurry.  I’m not sure it’s really necessary.

Until then, I will do as I have always done, learn from her example, listen to her counsel, watch her every move, and love her, fiercely, right back.