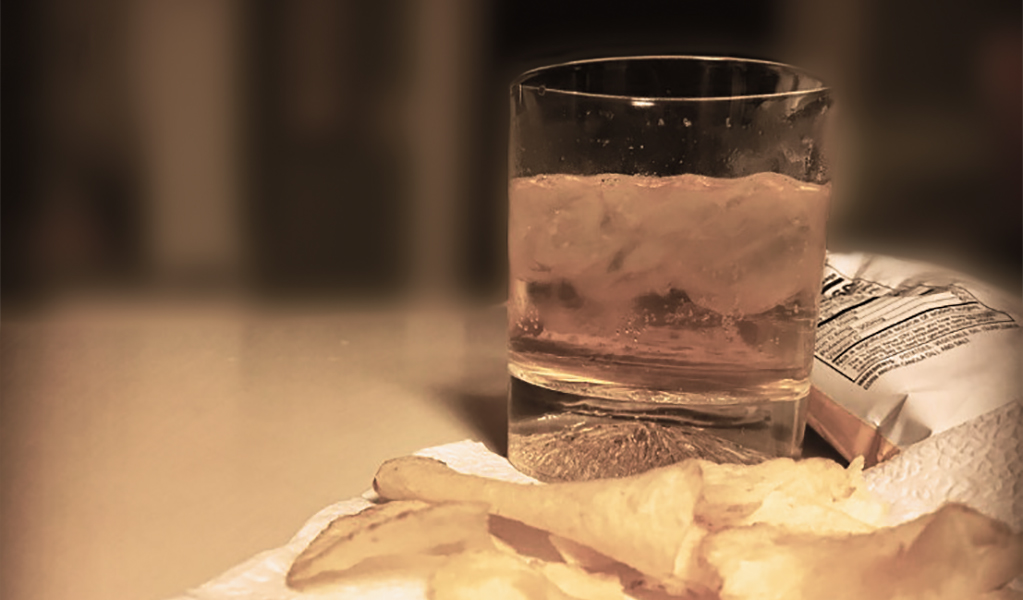 Jamie has set out glue traps. I hate glue traps. I think they are inhumane, but according to Jamie that’s all he could find at Dollar General. So, I sprinkled some peanuts on the glue-side in hopes of a quick catch and disposal.

We have yet to catch the mouse; however, an entire glue trap has gone missing. I imagine somewhere inside the wall of my house is an incredibly muscular mouse with its back leg stuck to a glue trap, its mouth full of peanuts. He is grinning at me, like a defiant peg-legged pirate.

Lately, I’ve been trying to prepare as many healthy, home-cooked meals as possible. It makes me feel better about my mothering. Healthy at our house means I make a lot less spaghetti, no casseroles, and I don’t allow myself to pick up pizza on the way home. I buy what Colin calls “fizzy water” instead of Coke, and I don’t make sweet tea. Jamie says it has nothing to do with good mothering, it’s because I like making things as difficult on myself as possible. A glutton for punishment, that’s me.

Once again, I’d successfully put off going to the grocery store, so I was desperately searching for a recipe to use “what I had in the house.” Not long ago, I realized my well-stocked pantry was yet another indicator I was turning into my mother. Every time I go to the grocery store I buy diced tomatoes and/or tomato sauce and kidney beans. Should a hungry contingent of National Guardsmen show up unannounced at my door, they would be guaranteed a home cooked meal. Mama does the same thing. We’ve teased her for years about being prepared for any casserole emergency.

Chicken tenderloins were already defrosted in the refrigerator. Two lemons shriveling and shrinking beside the slightly bruised, beginning to wrinkle, but definitely organic apples in the fruit bowl on the counter were only a day away from being used for batting practice in the yard. So, lemon chicken was a no-brainer.

I told Colin he had to eat the organic apples because they were $4.68 a pound. Now, he calls them the $4 apples and asks every time he bites into one if it’s the “$4 kind.” Jamie says I am a sucker for pretty packaging and have bought into the “hype” that is organic food labels. Champagne taste on a beer income, also me.

The boys are always hungry, so I knew I needed to get a move-on with dinner. Jack had texted me from the pick-up line at school before I’d even left the office:

“Mine was great, thanks for asking. How about yours? <eye-rolling emoji>”

“<laughing face emoji> Sorry, Mom. How was your day? But seriously, what’s for dinner?”

The commute from my office puts me home around 6 pm. By then even the best after-school snack is long gone. So until dinner is served in the evening, my kitchen is most definitely a hostile work environment. Sneaking fists full of Lay’s potato chips is half rebelling from being Chief Cook and Bottle Washer and half guilty pleasure. There’s also something slightly naughty about eating them when I know the children aren’t supposed to have them. Cruel? Not really. Worth it? Most certainly. Stress eater? May as well add that to my list, too.

I dug out of the deep freezer a bag of shredded hash browns that were left over from Christmas casserole cooking. I’d never made hash browns before but – desperate times.

I found a recipe online titled Fried Kale and Quinoa (Vegan and Primal). Vegan and primal?? I get the vegan part, but I’m not so sure about primal. What in the world does that mean? I certainly felt primal. I’m sure I looked primal too, as potato chip crumbs landed on my shirt and fell to the kitchen floor. Luckily, Paisley waits at my feet for such crumbs and thus buys me time on sweeping.

As badly as I’d love to cook something with PRIMAL in its title, I knew better than to make quinoa. Jamie hates it. He says it gives him indigestion. He also says there is a “texture issue.” In addition, it’s hard to eat something that is spelled funny. He’s making excuses.

In the end, I cooked down the kale in some organic vegetable broth. I added some salt, pepper and found some champagne vinegar, also a Christmas recipe leftover, that I sprinkled in at the last minute. Success.

Something wasn’t quite right. Add oil? I pushed the hash browns to one side of the pan and reached up into the cabinet over the stovetop for the oil. As I got my hand around the bottle, it slipped right through my hands. Somehow, in trying to catch it, I tossed it over my shoulder. Like a well-pitched softball, it sailed through the kitchen door and into the foyer, hitting the door jamb and popping its lid off on the way down. Cooking oil was slung all over the kitchen door and foyer wall in a pattern reminiscent of Jackson Pollock. I stood amazed as the oil bounced one last time and began to puddle on the wooden parquet flooring of the foyer. The oil spill and subsequent cleanup effort (How do you get cooking oil out of grasscloth?) were the reasons I had another Jack and ginger.

Supper was a relative success. We ate together at the table. Even though Jack mostly smeared his kale around on his plate, there were few leftovers. Conversation consisted of daily routines, basketball, what fresh hell the weekend schedule will bring and a middle-school boy’s expectations for an upcoming school dance. (Side note: Expectations are high. Disappointment is sure to follow.)

Near the end of supper, Ginny called. Long ago, Ginny and I decided to each “claim” a parent that would be our primary responsibility. Ginny laid claim to Mama, because they are of like temperament. Plus, Mama tends to listen to Ginny more than she will me. Ginny says it’s because she’s not bossy and I am. Whatever. Gin was calling to ask me to call Dad and see if I could “fix” him, “He is your responsibility and he is making Mama crazy.”

Daddy has a love-hate relationship of epic proportion with modern technology. He was trying to use Google from his doo-da (iPad) and order something from Amazon. It wouldn’t work. The Google images were confusing. Amazon was clearly engaged in a conspiracy to get Dad to order something he didn’t want. “Why does it keep asking me for my number? What’s this stupid thing talking about?” I reassured him that I could handle both the Googling and the Amazon ordering. Crisis averted.

Once off the phone and back at the kitchen table, Colin asked what it was all about. I explained. “So, are Jack and I supposed to claim one of y ’all, too?” he asked. “I guess so,” I said, “Although Ginny and I are really just teasing.” He was quiet for a while and supper continued. A little later, Colin put his arm around his Daddy’s shoulder, looked at Jack and said, “Ok, but just in case, I call dibs on Dad.”

Jack’s default, whether he likes it or not? Also me.