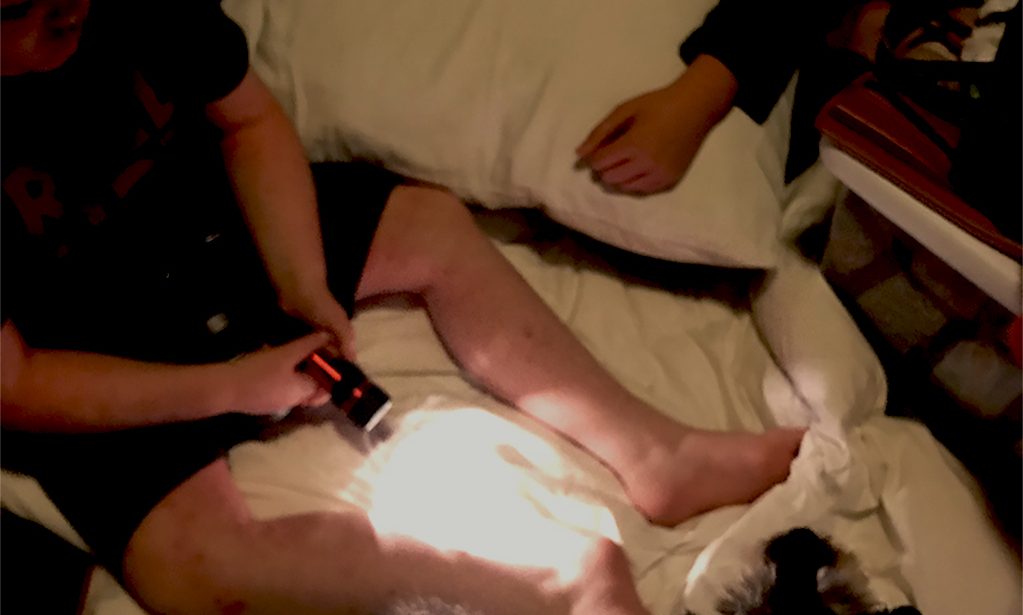 Weather in South Georgia is not unpredictable. We always have super-hot summers and mild, short springs. Fall is usually an extension of summer with days warm enough for short-sleeves lasting through October, sometimes even November. Winter doesn’t really start until around January and even then, we can count on cold rain more than hard, deep freeze. From time to time, we can expect a tornado or two, or at the very least, a handful of warnings. In Southwest Georgia, we all know that hurricanes blowing in from the Gulf of Mexico have the potential to be more ominous than those from the Atlantic.

Sometimes though, weather alerts feel a little like The Boy Who Cried Wolf. Our local meteorologists warn us for days about the potential for high winds and monumental amounts of rain, only to receive a smattering of rain with winds that blow over an outdoor trashcan. Inconveniences at best.

Last week as storm warnings swirled around us, I was spent. Completely exhausted by the what-if’s that had plundered my mind like dirty, smelly pirates, those last surges of adrenaline were all mixed in with gratitude, thanksgiving, and praise. On Tuesday evening ahead of the hurricane predicted to make landfall the next day, I got the news I’d been waiting almost a week to hear, “There is no cancer.” I was a walking, tear-stained soup pot brimming with relief and joy of the purest kind.

It was only at this point I tuned-in to the enormity of the storm headed straight for our little corner of the world. Our local news station had already declared themselves a “Storm Center” and were practically standing on their heads. This was their Super Bowl. You could see the anticipation and excitement on their faces as they used words in dramatic voices like, “impending, category four, first-of-its-kind.”

In our family, I’m typically Paul Revere. Jamie, our perennial dose of calm, rarely gets ruffled. A family counts on those personality traits to remain consistent. This time though, I hadn’t been paying attention. I was only focused on a world of three: Jamie, Jack, and Colin.

Come Wednesday morning, I’d not slept particularly well the night before. I was too full of gratitude to sleep. I felt like Ebenezer Scrooge when he awakens on Christmas Day to a world of freshly fallen snow and opportunities for goodness in abundance.

The boys were on fall break already, so when I left the house much earlier than usual at 4:30 am, they were still snuggled deep into their pillows. Paisley was on guard at the foot of Jack’s bed. Colin, sleeping diagonally across his bed, didn’t stir when I kissed his cheek.  Jamie’s slow, steady, deep snore filled the hallway. “Thank you, God,” I whispered as I tiptoed down the hall, my heart full.

Outside, it was humid and warm. The rain was coming; I could feel it. I went to the office and tied up a few loose ends. I left work around 10:00 am. I told Jamie I’d stop in at Wal-Mart and pick up some water “just in case” before I came home.

The minute I pulled into the Wal-Mart parking lot, I knew I was late to the party. Shopping at Wal-Mart is tricky on a good day. In the middle of hurricane preparation, it’s an all-or-nothing free-for-all. There was no bottled water. The only peanut butter left was all natural, and that wasn’t happening. Not even when facing down a hurricane.  There was a little bread. No milk. I got a pack of hotdogs and some sausage. I wheeled over to the camping section and threw in a flashlight, batteries, charcoal, lighter fluid, swooped down the pet aisle and muscled some dog food into the buggy. I grabbed toilet paper on the way to the register.

A lady whizzed by me in a full-on panic, her buggy full of Little Debbie cakes. An older couple in line talked about propane. I felt horribly unprepared with my BIC lighter and hand sanitizer.

This is my first lesson, I thought to myself. I will never do this again. When this thing is over, I will clean out the cabinet in the laundry room and stock it with supplies: gallons of water, lighters, candles, non-perishable food, JIF peanut butter. I will never scramble in an emergency again.

When I got home, we all unpacked the car and organized supplies on the kitchen table. Jamie and I put the basketball goal on its side, so it wouldn’t get knocked over. We pulled the trash can into the garage. Jamie moved his little red truck that he had inherited from his grandfather Shorty to the middle of the yard in hopes it would be out of reach of any falling trees.

And then, we waited.

The rain and wind picked up a little throughout the afternoon. Joe Cantore was still on his feet and broadcasting from the beach. I figured if it were truly a category four hurricane, Cantore wouldn’t be standing. The television signal was lost and found. I popped a bag of popcorn at 4:30 pm and told Jamie I thought we had over prepared.

At 6:30 pm we lost power. Slowly, the wind picked up. What had been a soft plunk-dunk, plunk-dunk of rain against the chimney flue turned into a soft whistle and then a low roar of the wind. Sheets of rain slap-slap-slapped the dining room windows. I lit candles.

We were anticipating. For a little while, all four of us stood in our garage and watched the wind blow over the pine trees on the edge of our property. At first, we just heard the tell-tale snap and deep thud. Then, we watched as trees began to fall, pulling their root balls above ground.

The change came suddenly. I shooed the children back inside. Jamie stayed out. The boys and I put an old comforter down on the floor of my walk-in closet. We called Paisley inside with us, too. We always do.

I don’t know why Jamie insists on staying outside and watching from the garage. It frustrates me to no end. I beg him to come to the closet with us, but he says, “I have to see what’s coming.” It’s completely illogical. I told Jamie if the hurricane blew him away, I was telling his Mama it was all his fault. “I can’t protect Y’all from inside a closet,” he fussed.

Every now and then, we heard another tree fall. After a while, Jamie came inside and moved us to the living room which is central to our house. It has no windows but gets light from an attached sunporch and our dining room. It lessened the apprehension a little, but I could tell conditions were getting worse.

Jack, our worrier, was calm. He busied himself by comforting Colin. Colin was apprehensive, constantly asking questions like, “You’ve seen it like this before, right Mama? Our house will be fine, right? We have a tough house, don’t we?” I kept assuring him and praying I wouldn’t be made a liar.

It was getting darker and darker outside. Limbs hit the roof, hard. It was all so incredibly loud. I thought the roof would surely give way or at any minute we’d have something come crashing through the ceiling. I tried to play games with the boys to keep their minds busy, but it wasn’t working. None of us could focus. Who cares if your ship is sailing in with apples, bananas, carrots and dog leashes when the whole world feels like it’s changing right outside your window?

Periodically, Colin would hold his hands out to Jack and me, “Pray, Mama. Please pray now.” I would take deep breaths, hold his hot little hand, sweaty with worry, in mine and pray words I knew he needed to hear: “Thank you, God, for Daddy’s who are keeping watch in the storm to keep us safe. Thank you for showing us how powerful you are. We know you direct the wind and rain. We know you keep us in the palm of your hand…” After every prayer, Colin would calm for a little while.

By some miracle, we never lost touch with Mama and Daddy in Elmodel and Ginny in Dawson. I knew there would be no way to get to them for at least a day or two.

It had to let up soon. The wind couldn’t blow with that kind of intensity for long. But it did. Jamie would come inside for a little bit and then venture back out. But, with night approaching, it was hard to see. Finally, Colin fell asleep on the couch. I lit the rest of the candles. Jamie came inside from the garage talking on the phone. “Who is it?” I asked. He pulled the receiver away from his face, “Dad.”

Jamie’s parents, David, and Rita (or as the children call them Hoss and Nana,) live in Acworth, Georgia. When Jamie and his sister Keisha were growing up, Acworth was a community a lot like ours, not the booming suburb just north of Atlanta that it is today.

Hoss is all that his grandparent-name implies. He’s short in stature but big in personality. His forearms remind Jamie of Popeye’s. Jamie says he always knew if he crossed the line his Dad could, “lay me out.” He’s tough, that David Cantrell. A real man’s man. There are rarely big shows of emotion. Tears are extremely rare. He does not suffer fools.

He never meets a stranger. Ever. He loves travel and adventure. He is generous with time, money and opinion. He is a die-hard NASCAR fan. He is generally good-natured and has an excellent sense of humor. He is one of the smartest men I have ever met.

Right out of high school, he married Rita and took a job on the line at the Chevrolet plant in Doraville.  Every morning, he left the house around 4:00 am, long before Jamie and Keisha woke for school. He rarely ever called in sick. Jamie remembers lots of times he fell asleep listening to his dad still at work in their basement fixing up a Hotrod to sell for a little extra. It was a hobby, but it was a hobby that paid. It’s easy to admire a man for working a job he hates, so he can provide a good life for his family.

Throughout the storm, David kept Jamie on the phone. The rain poured. The wind pounded. The trees snapped and thudded. Colin slept. Jack and I listened. Finally, after hours, the wind slowed a bit. The worst was over.

I put an air mattress in our bedroom for the boys and opened our bedroom window to a cool breeze. The moon provided enough light that I could see an unfamiliar landscape out our window. I was eager for dawn, so we could see.

It was only then, once I stretched out across our bed, (Jamie refused to come to bed and spent the night on the couch.) that I realized what David had done.

Maybe I’m romanticizing, I’ve been accused of that before, but I think David kept Jamie on the phone on purpose. Unable to be with us and protect in body, he stayed on the phone with his firstborn throughout the entire storm. Jamie explained to him what he was seeing.  He was able to tell his Dad in real-time what was happening.  David relayed information from satellites, radar, The Weather Channel.

From hundreds of miles away, David did what he has always done: protected and provided.   And that was my second lesson from the storm and one my boys learned too:

Daddy’s never stop being Daddy’s – even from as far away as Acworth.