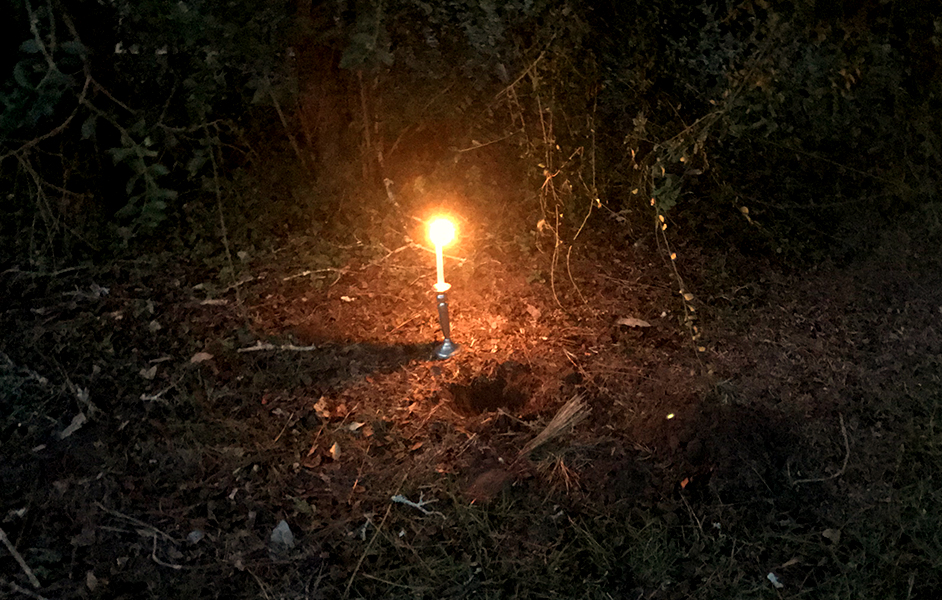 Things were getting better.  The initial shock was wearing off, and folks were busy with clean up, insurance, estimates, adjusters, livestock, crop evaluations.  There was still no power, but we were all making do. It’s amazing how clean you can get with a bottle of water and a washcloth.

Out at Mama and Daddy’s the “Little House on the Prairie” camp was working so well, they reported they “lacked for nothing.”  A friend had come by with a chainsaw and made fast work of the few trees still down, doing in 30 minutes what was taking hours for us to do with a band-saw and a hatchet.  Now, Daddy’s primary concern was the pecan tree balanced on top of the gas tank in the backyard. “What if it explodes?” I asked. “Well, I guess we’ll find out,” he answered.

We were all still a little off-kilter. We were tired, the kind of tired that scatters your mind and makes it hard to put one foot in front of another. I kept losing my keys. Mama had trouble keeping up with what day it was and how long it had been since the storm.  We were all a little weepy. Barometric pressure, I decided, was to blame.

Our power was restored just in time for the boys to come home from their grandparents in Atlanta.  I was happy to have them back and anxious to get back to work. Normalcy. Routine. That’s what we all needed.

I was buzzing around in the laundry room when first I noticed the smell.  It wasn’t pungent, but it wasn’t right. Soured clothes in the washer? No.  I wrinkled my nose as I sniffed. It wasn’t pervasive at all, but something was definitely off.  “Jamie, come smell this,” I called from the door into the kitchen. “What? I don’t smell anything,” Jamie was already answering me as he walked through the door with Colin at his heels.  “Me either, Mama. It smells normal.”

I wasn’t convinced but had too much to do.  I straightened up in the laundry room: swept the floor, picked up some dog treats that had spilled behind the small chest deep freezer that Daddy had given me for my birthday a few years ago.  (It was that birthday I knew I had arrived into Southern Lady-hood with the gift of a deep freezer.) Still, I couldn’t find the smell.

The next morning on the way out the door with the boys, I still smelled it.  “Babe, if you get a chance, see if you can figure out the smell,” I asked my beloved.

Mid-morning, I’d just settled into my routine at work, when my cell phone rang.  It was Jamie. “Hey…” he sounded out of breath. “How do you stop dry heaving?” he asked in between gasps and heaves.  “What in the world?” I asked. “Are you ok? Are you sick?”

Never one to over-dramatize, I feared Ebola.  “I found the smell, and I can’t stop smelling it.  What do I do?” he answered as he coughed and sputtered.  “Well, I don’t know. On TV people put a little Vicks VapoRub under their nostrils.  I think we have some in Colin’s room. What in the world is it?”

After the power had gone out and we were all busily cleaning out refrigerators, Miss Jill reminded us that it’s a lot easier to clean out a freezer after the power has come back on and everything refroze.  Then, you could lift things out, throw them away and defrost the freezer. I always mind Miss Jill. Like, for real. So, I’d let everything in my chest freezer refreeze and had set the weekend as my clean out the freezer day.

Except when the power came back on, my freezer didn’t refreeze.  I thought it was working just fine, but it wasn’t. A defrosted freezer had just been sitting in my laundry room – for days and days.

“The only way I know to describe what I saw in there is shit soup,” Jamie was breathing deeply and talking fast.  “You don’t understand what was in there, Liz. Everything was floating in what looked like three feet of murky water.  Rolls of creamed corn had exploded. Cinnamon buns had exploded. Ice cream and popsicles had melted. There were bags of frozen broccoli floating around.  <dry heave> You don’t even know. <gag>”

I started to giggle.

“This isn’t funny.  I’m dead serious. <dry heave>  How much stuff did you have in there?”  To be fair, I didn’t remember what I had in the freezer.  I knew it had to be awful. He continued, “I started trying to figure out the smell after you and the boys left.  I went over to the freezer and opened the lid. I knew it was bad when I got hit in the face with hot air. And the smell.  I cannot explain…. <dry heave>”

I put on my most soothing voice, “I am so sorry.  What’d you do with everything?” If he said he’d just left it in the laundry room, I’d already decided I was leaving him and taking the boys with me.  We could go to his mother’s. She would totally understand. I mean, I love him….but…

“I cleaned it all out. Whadda think I did with it?”  He was a little touchy. “I hauled it out to the garage, fished out everything that was still a solid and put it in a thick plastic garbage bag.  Then, dumped the liquid and hosed out the freezer. The smell is gone, but I can’t stop gagging. <dry heave>” I really didn’t know what to tell him to do.  “All I know is VapoRub, babe. Give that a try. Thank you for handling all that. I am so, so sorry. I had no idea,” I praised. I bragged. I extolled.

A week or so later, all I had to do was mention the freezer and Jamie’s jaw would clamp tight and he’d squint at me out of the corner of his eye.  “Don’t do it, Liz. It’s not funny.” Bless him.

A day or two came and went.  Mama and Daddy were still without power.  I lured them over with hot showers and the promise of Chinese food, Daddy’s favorite.

Before they got there, I went to feed Junior, Colin’s hamster and knew when I opened the cage something was wrong.  He always comes right to the door, when I come close.

Oh please, I thought.  Please don’t be dead. Not right now.  Not when everything is so abnormal. Please don’t be dead.  He was curled into a little ball in his bedding.  I’d just cleaned his cage the night before and he’d been fine. Hesitantly, I petted him. His little body was cold and stiff, and I knew I was going to have to tell Colin.

After losing Bailey not too long ago, Colin seemed a little more prepared. He didn’t cry as much and was heartened by the fact that Mama and Daddy were coming over and we could all attend the funeral together.

I caught Jamie’s eye.  He did not look like a man interested in digging a hamster grave. His lips moved without sound, “Seriously?  Are you kidding me?” I shrugged in response. Colin sniffled, “Mama? Can I plan his funeral?” Jamie’s eyes hardened and his shoulders slumped as he sank down into his chair.  This night had been set aside for Chinese food, not pet funerals. “Of course, baby. Whatever you think,” I answered with a warning tone meant for a less than enthusiastic father.

I’d bought matches for the storm, so I poured them out of the box and into a Ziploc bag.  I wrapped Junior in tissue and put him in the matchbox, just like I’d done for Bailey.

Mama and Daddy got to the house just as the sun began to set. They were met at the door by a weepy Colin, mourning the loss of his last hamster, but there would be no funeral without showers first.

Colin and Jamie dug a small grave in the same general area that we’d buried Bailey.  “He can be with his Mama now,” Colin reasoned. By this time, it was twilight. The yard was covered in that rich blue that I’ve always believed allowed only enough light for magic.

The moon was climbing in the sky and provided the kind of light you’d expect for mid-October. Broken trees stood witness to a small band of grownups, stepping over limbs and the clumps and lumps of a broken yard with lit candles in hand, walking in a scattered line out to a tiny graveside.

We all gathered close around the grave, lit by a candle in a pewter candlestick.  Colin began the service with a deep, authoritative voice, most interested in the ceremony now, “We are gathered here tonight to bury Junior, a good hamster, and good friend.  First, we will say a pledge and then we will all say what Junior meant to us. Please repeat after me.”

I looked over my shoulder at Mama, my eyes wide.  I was impressed. This seemed very official and well-thought out. A pledge? Where in the world does he come up with these things?

Colin continued, “I promise,” and we all repeated, “to love all animals, big or small.”  Half-way through, Colin stopped unexpectedly, “Deets. You’re not saying the pledge.” We all looked at Daddy. “Well Colin, I’m saying it in my mind.  I’m just not saying it out loud,” Daddy explained. “Ok, but that’s not how pledges work. You’re supposed to say it out loud or it’s not a pledge,” Colin explained.  Daddy capitulated with the full knowledge his egg rolls were getting cold and whispered to me, “I feel like a Druid standing out here with a candle at a hamster funeral.”

With Colin keeping an eye out for anyone who dared snicker, we each said something we loved about the little hamster.  Then, he ended the funeral with a prayer.

It was in that moment of silence just before his prayer, I realized the quiet of the fall night around me.  The folks I love most in the world were standing with me elbow to elbow, their faces all bathed in that beautiful, soft candlelight glow. Mama’s hair, still wet from her shower, was brushed back off her forehead.  She never ever wears it that way and in the light, I was reminded of the Driscoll’s with their high cheekbones and deep-set eyes. The edges of Jack’s red hair were highlighted by the glow of his candle and I could see hints of my grandfather, his namesake.

We all stood still in the yard and breathed together as Colin’s voice was clear and strong and deep, “Dear God, please bless Junior.  Help us remember it’s not about how big or small something is to know that it is important. It’s all about the love we share. That’s the only thing.  Love is the most important thing, God. Amen.”

As we filed back into the house together, I was so thankful to be reminded.  We were all going to be alright because love is the most important thing.  It really is.