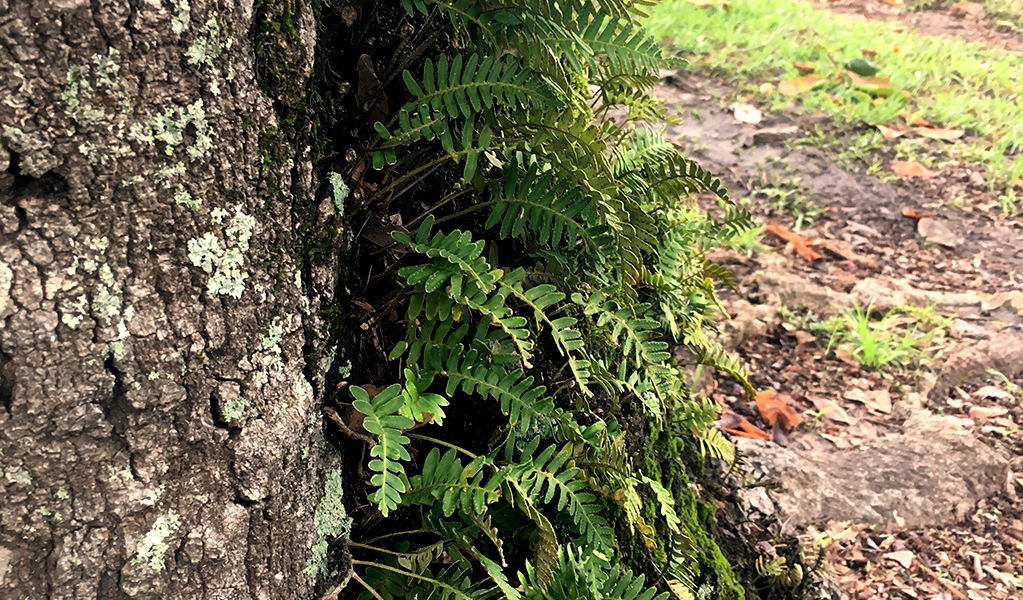 From what Daddy has put together, my great-great grandfather William Thomas Morgan was twenty-five years old and a member of the field artillery fighting at Gettysburg when he got word that his wife and children were sick with typhoid fever.  So, he left his battalion and walked most of the 844 miles back to Quitman, GA.

We do not know if he made it home before both his wife and one of his little girls died.  His only surviving child, Carrie, continued to live with her maternal grandparents until Mr. Morgan returned home once and for all after war’s end.

Sometime later, he and Carrie made their way to his mother’s family in Baker County, GA.  In 1867, he married Annie Hudgins, his first cousin. Eventually they built their house on what would come to be known within our family as Morgan Hill.  Together, they had nine children, six living to adulthood.

We know from pictures that it was sometime between 1869 and 1871 when Tom Morgan planted the three magnolia trees that today dominate Mama and Daddy’s front yard.  It was also around this time he planted the Blood-of-Christ camellia that blooms in the side yard.

The camellia is a prize.  After winter frosts subside, thumbnail-sized, tight, bullet-looking buds form on shiny, dark green leaves so uniform in size and shape they look like they’ve been cut out of a pattern with pinking shears; their scalloped edges pointed and sharp.  The bloom itself is a pure, snowy-white with a single drop and thin line of deep, dark red on only one or two petals. It is a showstopper: a reminder of sin, repentance and forgiveness.

One Sunday this spring, Mama placed an armful of the blooms in a glass bowl and put them on the communion table at church.  They held my attention for the entire service. Stunning in their simplicity, a sermon unto themselves. I couldn’t help but think of Tom Morgan: his walk home, loss, and rebuilding.

The three 150 year old magnolia trees are so big now they tower over Mama and Daddy’s house, arms spread wide to shade the entire front porch.  The blooms, especially in the warmth of early summer smell like brown sugar left on the stovetop a little too long: sweet with a hint of scorch.  The gnarled old tree roots stretch and bend from the base of the tree, ebbing and flowing out of the dark colored dirt, making miniature mountains and hills all around the trunks.

In the fall, the trees produce dark mustard-yellow burrs that eventually fill with red seeds.  The seeds, like red coffee beans, attach to the burr with a thin strand of plant material. When the burrs fall from too high to reach limbs, they explode into the dry leaves below with an unmistakable pop, a grenade in the front yard.

When Ginny and I were little, those gnarly, protruding roots were cook-stove tops, secret hiding places, fairy coves.  We would pull the red fruit from the burrs and pretend they were our food, little girls lost in the forest. In spring, the magnolia blossom’s fuzzy bud covering opens and falls to the ground.  We called the fuzzy petals puppy ears because they are smooth and wrinkly on the inside but soft on the outside with a fur-like covering. They were fairy blankets too, and we left big piles for the fairies between the protective knees of the trees.

Raked and burned in the fall, dry magnolia leaves sizzle, pop and crackle, scenting the hot air with bitter, smokey perfume.  Burning leaves and ash sift to the bottom of the smoldering pile with new leaves and burrs raked over the top of the mound like icing on a cake.  Smoke pours out of the mound’s pointy top, a little south Georgia volcano in the dirt of our driveway. Glowing ash and charred burrs enticed little girls to jump over in our sandaled feet.

Mama caught us once, jumping.  She warned us with a story about a little girl that lived not far away whose dress caught on fire when she jumped over a pile of burning leaves.  She told how the little girl ran scared through the yard, her day-dress on fire, and burned to death. Ginny’s long sandy blonde hair and little hop-step she took then made me too afraid to jump burning leaf piles anymore.

Low on the trunk of the magnolia trees grows a flag-sized patch of resurrection fern, pleopeltis polypodioides.  The fronds of the fern are small; most would fit in a child’s palm.  They grow on a tiny vine that attaches itself to the tree without overlap.  Without rain, the fern withers on its vine. The fronds curl in toward its middle, a leafy fetal position, sad in its withdrawal.

The dried fern fronds tethered to their vines are reminiscent of the cicada skeletons that cling to the big oak tree in Nanny and Pops’ yard.  Their scratchy claws latch on tight to the old oak as a newly escaped cicada wiggles its way out of its too small shell. Pops used to say the cicadas sang my nickname, “Zi-zzy.  Zi-zzy.” No one but close family uses that name, but Pops said the cicadas knew it too and sang it just for me.

Daddy didn’t like to turn on the air-conditioner before June, so we slept with our windows open in the spring and early summer.  The attic fan in the hallway pulled a reluctant breeze through the house and over us sleeping on top of the covers. Bugs bounced on the screens trying to get inside, and I fell asleep to the murmur of grown-up voices and the cicadas singing my nickname like a lullaby.

Ginny and I were allowed to pick as many cicada skeletons as we wanted off the oak tree.  They looked like the scarabs in a book Daddy had about ancient Egypt. Split down the middle, they couldn’t be worn as rings.  They were too small to hide anything inside. It was easy to recognize something alive and new had emerged from the crusty exoskeleton, but they never played a role in our make-believe.

We weren’t allowed to bother the resurrection fern.  Mama made sure we understood its miracle. Aptly named, after even a quick rain shower, the dry resurrection fern slowly returns to its luscious green and unfurls its arms open wide, blanketing the side of the magnolia with feathery fronds, a reminder that all is not ever lost.

Hardened and weathered by war and loss, Mr. Morgan was gentle enough to stand outside his married daughter’s bedroom as she labored through the deliveries of ten children.  Unlike most men of the time, including his son-in-law, Mr. Morgan didn’t want to be too far away from his daughter, just in case. It was he who cut the babies’ umbilical cords, wrapped the new little ones in soft cotton blankets, and was first to hold them close.

By the time of his death at age 86, he walked the long porches of his house at night, fighting battles that existed only in his mind.  Shouting warnings across the porch railings to invisible soldiers, his shock of steel-grey hair visible even in the dark of midnight.

There had to have been some romance in a man who would plant camellias and magnolia trees and wait through the screams of a laboring daughter in order to hold a newborn baby.  No matter what nightmares his memory held, there must have been room left for beautiful things too.

Sometimes, I stand on the end of Mama and Daddy’s front porch in the ink-blue twilight that often lingers in the shadows on Morgan Hill and think about Mr. Morgan – what he lost and what he found.  The resurrection fern is visible from the porch steps – dry, parched, scaly and alternately lush, soft and green. Hope clinging to a vine attached to a magnolia tree.

Many hold on tightly to hope, crave it in times when the mind is restless and refuses to settle.  I find it in the silliest of things: mockingbirds in an azalea bush, a well-sharpened pencil, even empty cicada shells.

It’s likely the romantic in me, Mr. Morgan’s great-great-granddaughter, but I would like to believe that even as he fought imaginary battles and sweated through tortured dreams, Mr. Morgan found hope, redemption and some peace in the pure white of a Blood-of-Christ camellia blossom and opened perfumed magnolia blooms.