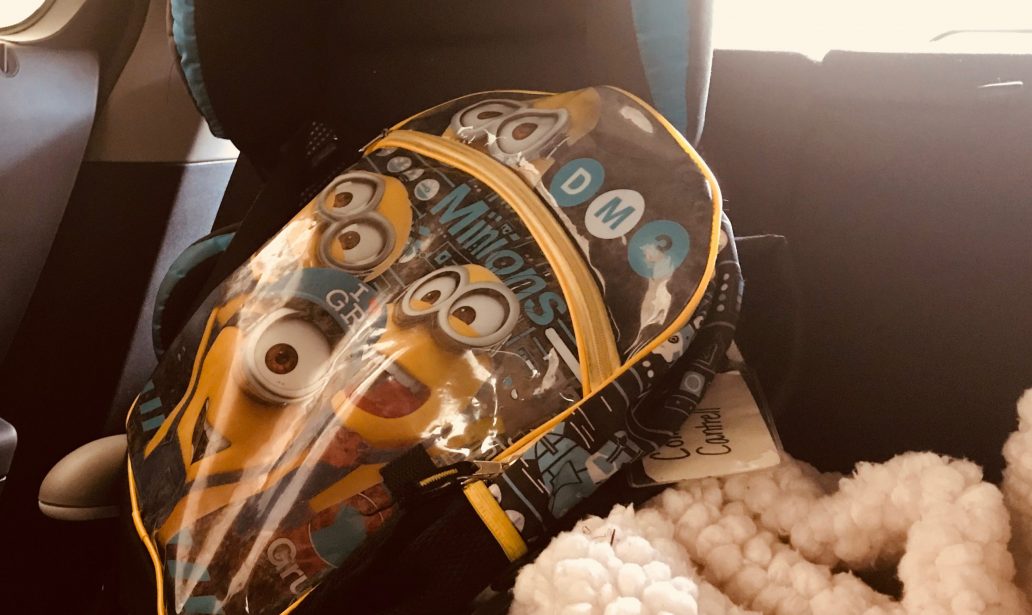 “What’s a terrorist?” Colin asks from the backseat on the way to school. He is bundled up under the big, thick, soft blanket that Ginny gave him for Christmas. On these hour long drives from home to school, he rarely goes back to sleep but sometimes he catnaps, usually eavesdropping on his big brother’s conversations with me.

Jack is in Washington, DC, on a class trip. So today, it was just Colin and me in the car. Before we’d even left the garage, he had snuggled down deep into his blanket, so I was listening to NPR, the soft grown-up voices providing a perfect backdrop for a dozing first grader.

He is only seven, but his face has begun the change from baby boy to young man. His eyes clearly sparkle mischief, but the tops of his little hands still have remnants of baby softness to them. His lips aren’t full like Jack’s but form a curvy line, like Charlie Brown’s, drawn in a Crayola color named bittersweet – not too pink and not too peach.

Colin is a body in motion: catapulting himself horizontal to the ground to catch a football, unafraid of the pounding his body will take on landing; running hard through the hallway and jumping as high as he can to pop the top of the doorjamb into his bedroom with his open hand; asking me to time him while he stands on his head with his feet high in the air. (His record is 1 minute and 20 seconds.)

Our neighbor calls Colin The Governor because the child never meets a stranger. He is interested in people and their stories.   Like his Granddaddy Cantrell, who we call Hoss, he finds something in common with most everybody he meets and puts folks at ease with his quick smile and gentle laugh.

Today, wrapped in his burgundy blanket with still-sleepy eyes, he asks me with a voice full of innocence, “What’s a terrorist?”

On September 11, 2001, I was the assistant scheduler for Senator John Breaux (Ret., D-LA). Our office was in the Hart Building, across the street from the Capitol. Those of us on Capitol Hill saw no physical carnage that day, but the danger was so close and present and imminent I could taste it – like a ball of aluminum foil in my mouth.

It’s been long enough now that I should have forgotten many of the details from that day: what I said to Jamie when he dropped me off for work, what I was wearing, and the sound of hundreds of clicking heels running across a marble floor. But I haven’t forgotten. Not one, single, detail.

It used to be that the events that unfolded for me on September 11th would play in my mind from time-to-time without warning, a much longer Zapruder film.  This one with sound though details consistent each time, shown through a first-person vantage point. The lady in the blue cardigan runs toward the daycare center next to the church across the street from our office. The police officer desperately tries to keep traffic going one way down a one-way street, endlessly screeching his whistle. The man barking obscenities out the window of his car as he maneuvers his way into streets full of running people. The senator, who I had seen a handful of times before – always in charge, always a commanding presence – runs by me, her high heeled shoes dangling from her right hand.

Now, the day plays out in still photographs with the soundtrack behind it – not coinciding with the motion like it used to – tires squealing, people shouting and always the policeman’s whistle. The images are like snapshots now: high heels, police officer, running mama in a blue cardigan. The images and sound still so clear, if I reach my hands out in front of me surely I could feel something beneath my fingers – something hot and clenched and knotted and dry.

That was seventeen years ago and yet today, when my seven-year-old asks from the backseat, “What’s a terrorist?” it catches me so off guard, I feel spun into slow-motion, one of those microfilament fishing lines spun off the rod too fast – no thumb to stop it. Glancing into the backseat, I see my hair fall over my right shoulder, my head turns as if I’m underwater. Pictures. Soundtrack. Aluminum.

“Mama?” he asks again. Thumb to filament. Think. How do I answer? Honesty is important in answers like these. These are the answers that can shape futures, I think.

“You know what it feels like to be afraid?” I’m looking at him through the rearview mirror now. He shakes his head. “Well, terror is a feeling a lot like being afraid – but it’s more extreme. It’s bigger than fear. So, if you’re a terrorist, what do you think that means?” I hold my breath. “That you want to scare people really bad?” he answers while looking out the window. “Yep,” I answer him, my breath shallow.

“But why, Mama?” his eyes are open-wide, the crinkled line between his eyebrows means he really wants to know. “Because,” and I pause for a tiny prayer that if this answer shapes his future, it is shaped for the highest form of good, “because every single day there is a fight going on in the world between good and evil. There are people who choose evil and there are people who choose good. That’s why it is so important that you choose…what?” I smile-ask him. “Good,” he says with conviction.

We go on like this for a little longer. It’s a simple answer, but true. I explain that the more good we put out into the world, the more it fights evil. I say every choice we make is a choice between darkness and light, right and wrong. I tell him every time we choose the light, the good and the right, it knocks evil back a little further.   It pushes the evil and dark and awful and scary into a small corner in a small room behind a small door.

“Have you ever seen a terrorist?” he wonders to me. “No. I don’t think so. Have you?” my voice a dry-mouthed whisper. “No,” he says, relieved. We are at his school now. I pull up to the crosswalk. He unlocks his seat belt. Opens the door. Stands up in the floorboard and slings his book bag over his shoulder. The Minions who were so yellow and proud at the beginning of the school year look a little less thrilled to be headed back to school again today, so close to the end of the year.

“Make good choices today. I love you.” He looks over his shoulder, beginning another ordinary day, “I love you,” he answers. He walks with such confidence down the sidewalk and under the portico it’s hard to believe he is only seven.

I pull the car back into traffic. Almost eighteen years, and yet – still: Pictures. Soundtrack. Aluminum.