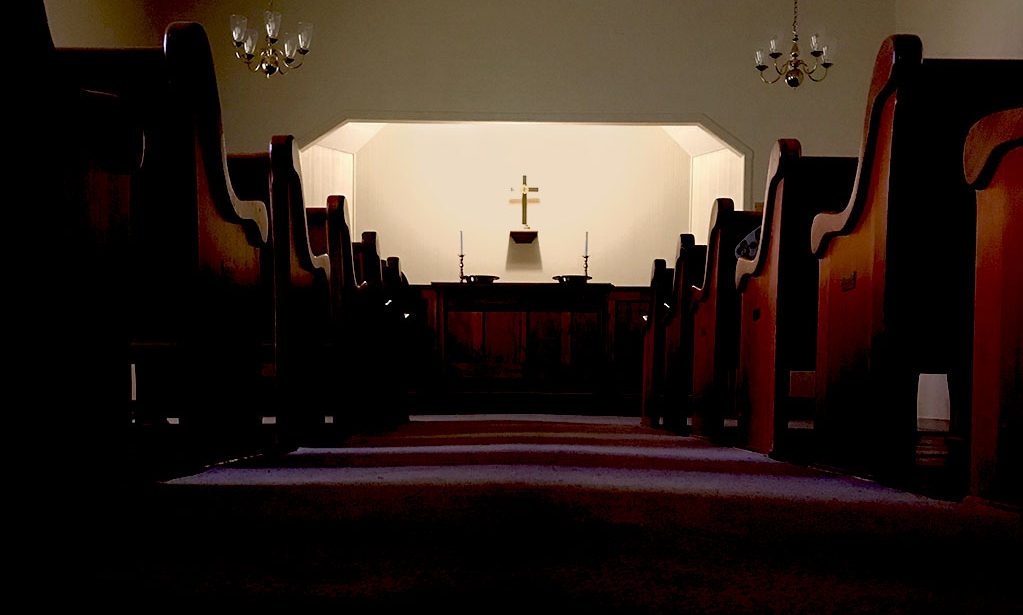 For those of us who choose to worship in small churches, at least those in southwest Georgia, our responsibilities are clearly defined. There are so few of us, we all have to do most everything.  Like – everything.

At Elmodel Presbyterian, at the corner of Georgia Highway 37 and Jericho Road, each woman who so chooses, whether a member or not, signs up at the beginning of each year to be the Hostess for a Month. Don’t get too excited. There is no plaque, or honorable mention in the church bulletin, or even a special monogrammed apron for the said hostess.

Being the hostess at Elmodel Presbyterian means you’re responsible for flowers in the sanctuary on Sunday, the after-worship “snack,” and if you sign up for a month between September and May, it’s your responsibility to decorate the fellowship hall and plan the second Sunday potluck supper.  To someone unfamiliar with the way we do things, I’m sure this sounds ridiculous. We’ve just been doing it for so long, we’re used to it.

I specifically remember after Jamie and I moved home from Washington, DC, the first time I signed up on the Hostess Sign-Up Sheet.  I got chills. I felt a tiny earthquake. There was a shift in the atmosphere. Not unlike, I assume, a debutante ball, signing up to hostess a month at church meant:  I. Had. Arrived.

I quickly realized things had changed since, as a child, I’d watched Mama be the hostess.  For example, the ladies decided there would be a “very simple snack” served after every Sunday worship service.  We didn’t do that when I was little, but the ladies saw it as an opportunity to socialize for a little bit after church. “It’s really the only time we get to visit,” someone reasoned.

“What do I bring?” I asked Mama.  “Oh, just something simple: cookies, cheese and crackers, some fruit.  Depends on the season really. Everybody brings something different. Don’t worry.  It’s not that hard,” she answered.

Sometimes, if the lady is really feeling it, her personality shines during her hostess month.  Some have a florist put together a pretty arrangement for the communion table for the first Sunday and then keep it in the refrigerator until it just can’t be put out anymore.  Some pick pretty arrangements from their flowerbeds. Once or twice, folks have put stalks of cotton, wheat sheaths, or even religious art on the communion table instead of flowers.  It’s always different, and it’s always personal.

Second-Sunday potluck decorations have varied from plastic tablecloths with coordinating paper napkins, to linen tablecloths with votive candles inside Mason jars with small table arrangements of cut wildflowers and baby’s breath. It really varies, and it’s always fun to see what someone is going to do.

Not too long after we’d been home, I was pulled over by the Georgia State Patrol on my way to church.  “Officer, I am SO SORRY, but I’m the hostess at church this month, and I’m running late, and I’m trying to keep my meatballs warm,” I pleaded.  Bless him, he let me off with a warning, and a promise I’d pray for his safety in earnest.  (And I still do!)

The longer we’ve been home, the easier it’s gotten.  I plan a little better and don’t beat myself up as much about bringing store-bought snacks like the pre-cut cheese, crackers, and pre-sliced ham or turkey circles tray one can purchase at WalMart for $14.99.  I often pick up something sweet to go with it: brownies from a box, or a Sara Lee pound cake with Redi-Whip whipped cream and strawberries. I do slice the strawberries myself.

The ladies in Elmodel have been hostessing for so long that now tradition dictates the month each lady is hostess.  Mama is always the hostess for December. Miss Janice usually picks a month in the fall, like October. Ginny likes Spring, March or April.  The farmer’s wives steer clear of hostessing on months during planting or harvest season, because they could just as easily find themselves on a tractor on a Sunday as sitting on a church pew.

With only a handful of us, we usually sign up for two months instead of only one.  So, we try to pick months that are relatively far apart. No one in their right mind would do back-to-backs!  We help each other out in a pinch and cover for each other if something comes up. We’re good like that.

To be totally honest, being an active member of a small church is sometimes a love-hate relationship.  Mostly love. Rarely hate. Sometimes irritation.

Mother’s Day was no exception.

May wasn’t my month, thank heavens. It was Miss Judy’s.  Not only was it the second Sunday potluck, but it was also Mother’s Day.  It was a perfect storm because we were also scheduled to have Communion.  That meant Miss Judy wasn’t responsible for flowers, but Mama was responsible for preparing communion.

There’s a fair amount of irony in having a church potluck on Mother’s Day.  Because it’s the last potluck until fall, we feel like we need to keep it on the calendar; gluttons for punishment are we.  We’d all really love to be sitting down, with our feet up. I’d have enjoyed a martini and an old John Wayne movie – but no.  There was work to be done. At least we were all in it together. Nothing says Happy Mother’s Day like a work camp.

The women of the church have a very active text thread.  When I say very active, I mean it is not at all uncommon for me to come back from a meeting and have 63 missed texts. So, in the days leading up to church supper, we all got the sense we should plan on a fair crowd. In Elmodel Presbyterian terms, that means more than 15 but probably less than 30.  But, it’s like Mama says, “We have to be prepared to feed these folks.” It just means each lady brings an extra casserole or two to cover the spread.

So, I decided I would make:  chicken spaghetti, pork and beans, corn casserole, squash casserole, and strawberry shortcakes. The chicken spaghetti is easily doubled, so I made two and froze one for my sister-in-law who is expecting my first niece this summer.  Two birds with one stone. Corn casserole is so easy to make, it’s an embarrassment to even make a fuss over bringing it. Plus, it’s a Cantrell favorite and goes super well with ham, which Miss Judy told all of us she would bring for the main meat.  I stole my squash casserole recipe from the mother of one of my friends in high school. It’s secret is Hidden Valley Ranch dressing dry mix. Delish!

I took a shortcut and used the Bisquick biscuit recipe on the box for the shortcakes.  I do add two teaspoons of sugar and a teaspoon of vanilla to my batter, so they don’t taste so bready.  They’re no problem to make, but quite showy once you split them in half, spoon whipped cream on top, top the whipped cream with freshly cut strawberries, place the top of the shortcake back on and dollop a tiny bit more whipped cream on the very top.

The baked beans were a last minute add-on, mostly because I had everything I needed to make them.  Mama showed me a long time ago how to “doctor” a can of Bush’s baked beans by adding sauteed onions, green bell pepper and a few garlic cloves, molasses and/or brown sugar and lots of fresh cracked black pepper. I could make them on the stovetop and let it simmer, thereby freeing up the oven.  Easy. (It wasn’t until right in the middle of catching up with old friends in the middle of eating church supper, I realized I’d forgotten the beans and left them on the stovetop at home. Que sera, sera.)

Once I got into the kitchen and got started, it wasn’t so bad.  Jamie volunteered the night before to go to the grocery store for me Sunday morning, allowing me to sleep in a little.  That was gift enough, but then he and the boys got in the kitchen and chipped and chopped with me. We had such a nice time being together, I didn’t really mind at all.

Lately, I call Jack into the kitchen when I cook.  I figure he needs to know the basics before he goes to college: how to chop an onion, how to grill a cheese sandwich, how to make sweet tea, pimento cheese, spaghetti, egg salad, and brownies. Our cooking classes made more sense after I told him, “No girl in her right mind would marry a boy who didn’t know how to make spaghetti,” or “I would have never dated someone that couldn’t follow the directions on the side of a box and pull together a pan of brownies.”  He’s gotten pretty good at brownies.

A long time ago, Mama told me love was a choice.  In all my infinite teenage wisdom, I told her she was wrong. “You can’t help who you fall in love with,” I remember saying to her back as she washed dishes in the kitchen sink.  She answered that wasn’t exactly what she was talking about, but it was true for that, too.

I know now she is right.  Love is a choice.

I love a little country church in southwest Georgia.  I choose to be a hostess, print the bulletin, play the piano.

I choose to sing lots of the same hymns and pray the same prayers congregants have done for over a hundred years at that same spot, in that same little church.  I choose to close my eyes and listen to the quiet inside the sanctuary.  I choose to breathe in deeply and listen for the whispers of a thousand prayers still bouncing around those pine walls and high ceiling.  I choose to look, deliberately, at Mr. Hubert’s hands, a farmer’s hands, as he holds the brass offering plate out for us.  I choose to recognize it’s Daddy’s hands that offer me communion.  I choose to watch Miss Grace in profile as she takes notes from the sermon in a small notebook.

Long ago, Mr. Walter, our former minister, used to say, “It is hard to get here sometimes.  Hard to pull ourselves away from the things we want to do – watch the ballgame, listen to music, stay in our comfortable clothes, I know.  But don’t you find it to be true that after we worship here, together, in this little space, we leave feeling so glad we came?”