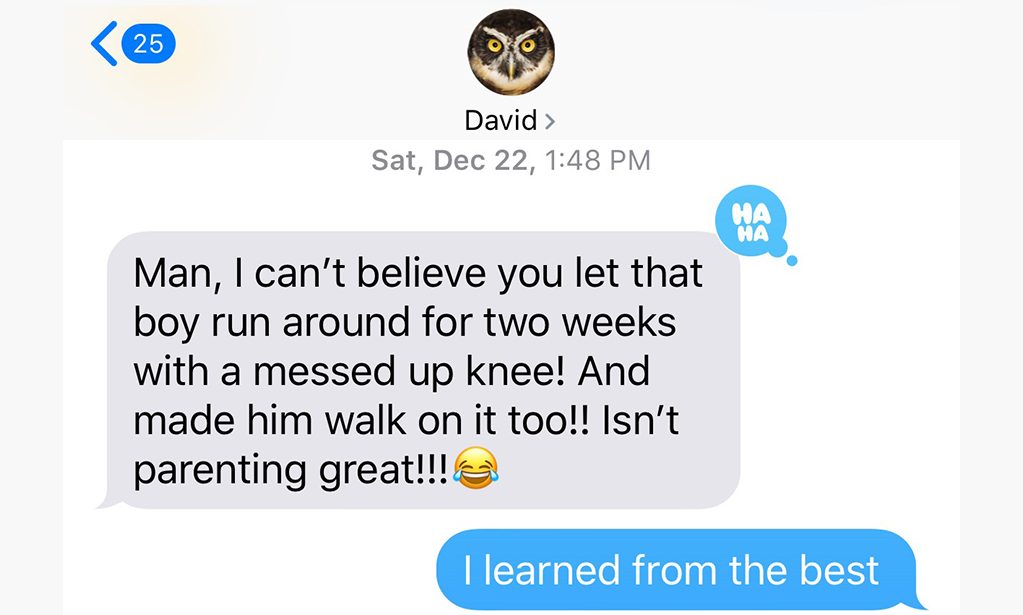 “Mama, I’m hungry.” If I had a quarter for every time this was bellowed down our hallway, whispered into my ear, or declared aloud at the exact moment I finally sat down from any number of chores, I’d be a millionaire.

After nearly two weeks at home over the holidays with my boys, I’m convinced one of the reasons I am not a millionaire is because Jamie and I feed two children every three hours. They go through food like a buzzsaw through plywood.

Everyone has a holiday food, one recipe that has to be on the table or the entire holiday is ruined.  At Thanksgiving, my father-in-law has to have his mother’s dressing recipe. Geneva Cantrell’s dressing is a traditional Southern cornbread with sage.  The secret has something to do with stale toasted white bread slices. My sister-in-law comes the closest to making it exactly like Mawmaw’s. At Christmas, I need Mama’s red velvet cake with cream cheese icing – no nuts.

For Jamie and Keisha Cantrell, Christmas wasn’t Christmas without sausage balls for breakfast on Christmas Day.  (And, as it turns out, the Alabama Christmas album. “Thistlehair the Christmas Bear” still makes Keisha and Jamie cry.)  Miss Rita always made the sausage balls, but she used Miss Dianne Milton’s recipe.

The year we married, Miss Rita gave me a Piney Grove Baptist Church Cookbook wherein one might find the aforementioned sausage ball recipe.  Look on any Southern woman’s bookshelf and you will find a church fundraising cookbook. We all know good and well every church in town is, at some point, going to have a church cookbook fundraiser, and it’s just flat out bad manners if you don’t buy one when the Women’s Bible Study Church Auxiliary come selling them.  Even if you don’t need one. Even if you already have one from six years ago. Every woman I know has at least four.

Miss Dianne’s sausage balls are the best sausage balls I’ve ever had, by far.  When we take them to church, they’re gone in a flash. They’re also gone in a flash when I serve them at our house, just like Miss Rita did, on Christmas Day morning.  This year, I counted. Somehow between our family of four and my two in-laws, we ate approximately 175 balls of delicious sausage, Bisquick and cheese goodness. Sausage balls for Christmas are ubiquitous in the Cantrell family, and sausage balls aren’t cheap, my friends.

My mother defends her grandson’s near-constant whimpering for food with every grandmother’s favorite, “They are growing boys, Elizabeth.”  At no point was that more obvious than at Christmas Eve communion when I noticed that the dress pants I’d bought Jack before the holidays were already too short.  As I bowed my head, I caught a glimpse of his brightly colored and mismatched “funky socks” sticking so far out of the hem of his pants I could make out the Mona Lisa on one pair and brightly colored sushi on the other.  “Jack,” I whispered through clenched teeth as reverently as possible in the middle of a candlelight communion service, “why in the world do your socks not match?” He glared at me and responded with equally clenched teeth, “Because it’s not cool for them to match.”

At that point, I hardly cared.  By the time Christmas Eve rolled around, Jack had been on crutches for two days. He’d been complaining about knee pain since October, but I’d kept putting him off.  “It’s just growing pains,” I’d say. “Show me someone whose knees don’t hurt,” I’d quip. “Take a Tylenol,” I tossed over my shoulder.

Four days before Christmas, Jack complained about his knees within earshot of Daddy. With 13 years of EMT experience from a little over 30 years ago, Daddy is our go-to for all medical questions.  No matter the ailment, Daddy is usually our litmus test before deciding on the necessity of a doctor’s appointment.

Sure, he has some professional training and years of experience, but he also has good instincts.  A big believer in home-remedies, Daddy is absolutely not a fan of medicine. From Daddy’s point of view, there are few ailments that necessitate pharmaceuticals of any kind.

Daddy, when confronted with a sixteen-year-old with a sinus infection, slathered the bottom of an enamel roasting pan with Vick’s VapoRub. Squeezed into the pan the juice of six lemons and threw the lemons in too. Yanked a couple of rosemary stems off the bush outside the back door.  Opened an umbrella over the roasting pan, creating a rather crude but incredibly effective tent. Covered the umbrella (and the sixteen-year-old) with towels and then poured boiling water directly into the pan on top of the Vick’s VapoRub. If you can catch your breath, it works like a charm. Who needs penicillin?

Just after we moved back home, I convinced myself I had some type of terrible neurological disorder.  My fingers would draw into my palm, my heart would race, my eyesight would blur. Looking back, it was clearly anxiety, but my new primary care doctor ordered a CAT scan to rule out anything “untoward.” Crying, I confided to Daddy that I was terrified about what the CAT scan might find.

Truth be told, Daddy had probably diagnosed anxiety from the get-go, but when I went to him all wound up in a worry-ball he told me to look deeply in his eyes for a minute without breaking eye contact.  I did. “Mmm-hmmm,” he hummed. “Now, hold out your hands, palms down.” I did. With his thumb and index finger, he squeezed each of my fingertips. “Mmm-hmm,” he continued, “Shuga, there’s nothing wrong with you,” he declared with all the confidence in the world.  “How do you know?” I asked. “I’ve known you so long, I can look at you and tell. Plus, your eyes are clear and your fingernail beds are perfectly pink,” he answered. I went ahead and had the CAT scan, but I didn’t worry about it anymore.  I still check my fingernail beds from time to time.

“Stand up straight on the hassock, so Deets can really see your knees,” I directed.  Jack pulled his pants legs up above each knee. I was busy stitching up a split seam in a dress I’d wanted to wear to Christmas Eve communion, but couldn’t until I repaired a small hole in the seam that had appeared after I’d washed the dress.  Of course.

“Who still sews?” Jack asked.  “Mothers who save money to buy groceries,” I’d answered.  I am no seamstress, so I was incredibly focused on the task at hand when Daddy said while running his hand gently over each of Jack’s knees, “Hmm.  You’d better get him an appointment, Elizabeth.”

“An appointment?  What in the world?  Really?” I couldn’t believe it. I don’t know that Daddy has ever advised a doctor’s appointment as a first option before.  “This right one looks swollen to me. Not too much, but I’m pretty sure I feel fluid on it,” he explained in a super-calm, do-not-panic voice.

Two days later we were at an orthopedist. “Oh yes, ma’am,” the doctor said because he was all of 26 years old, and I am clearly old enough to be his mother, “his right knee is definitely swollen.” Jack winced and looked at me over the doctor’s shoulder with a grin and a gleam in his eye that screamed, “I told you so.”

“When did the injury occur, my man?” the young doctor, suddenly all hip and chummy with my 14-year-old. “So long ago that I’m not even sure I remember,” answered my red-haired Tiny Tim, a whisper of pitiful in his voice.  “It had to have been late October or maybe – at the very latest- early November because I remember specifically it hurt over Thanksgiving break,” he continued. Aghast, the doctor looked back at me as he asked, “Ma’am, does that sound about right? Has it been hurt that long?”

Smiling my best I’m-Doing-the-Best-I-Can smile, I explained to the doctor in way too much detail how he had been complaining for a while, but because I didn’t notice any swelling I thought it was growing pains.  “I Googled it, and WebMD said…” Doogie Howser interrupted me with, “Never Google it. WebMD is historically inaccurate.” I sighed, knowing we were headed for something that would necessitate further appointments. I didn’t have to see Jack’s grin to know it was there.

Over the years, Jamie has told the children hundreds of stories about his grand adventures in the neighborhood with his buddy Reggie.  When Jamie was about ten years old, he and Reggie were In the middle of a super intense game of “Don’t Fall in the Lava.” Balancing on the side of a flower bed made of tiered railroad ties, Jamie was winning, until he fell off the side of the railroad ties into the “lava” and rolled his ankle.

When he got home, he told his Mama and Daddy his ankle hurt.  To which they responded, “You are totally fine. It won’t get any better if you baby it,” or Hoss’s favorite, “Shake it off, boy. Quit hobbling around. You’re going’ to church – hurt ankle or not – so quit being so dramatic.”

A few days later, with Jamie still complaining, a frustrated Miss Rita took him to the doctor.  After x-rays, it was determined the ankle was broken. Jamie reports ice cream sundaes after the doctor’s appointment.  He also got to pick whatever he wanted from KMart, too. He’s always wondered if it were his bravery in spite of severe injury that convinced his sister to go into x-ray technology for her career.  My boys love this story.

Flash forward thirty years to my pushing a completely vindicated Jack in a wheelchair through the hallway of the orthopedic center because it was recommended he “absolutely not put any weight on the knee until the MRI results come back.” It was impressed on me that we “not do any more damage.”  The doctor was of the opinion Jack likely had either a compact fracture or a torn lateral meniscus.

Jack literally laughed all the way to the elevator.  I couldn’t wait to call Miss Rita.

We called it the Christmas Meniscus.  The day after Christmas, we were back at the doctor’s office for the results.  Jack asked Jamie to go with us “because I want you to be there to hear the MRI results, Dad.”  Wow. Dramatic much?

As it turned out, Jack had a severe bone contusion – fancy for a bone bruise.  Two weeks of crutches and two more weeks of physical therapy. No break or tear or rip or snag. (Thank heavens.) “It probably didn’t break because I drink all that milk, Mama.”

He is probably right.  The child drinks milk like fish drink water and at $3.65 per gallon, drinking four gallons of milk a week, I figure he’s a bargain.