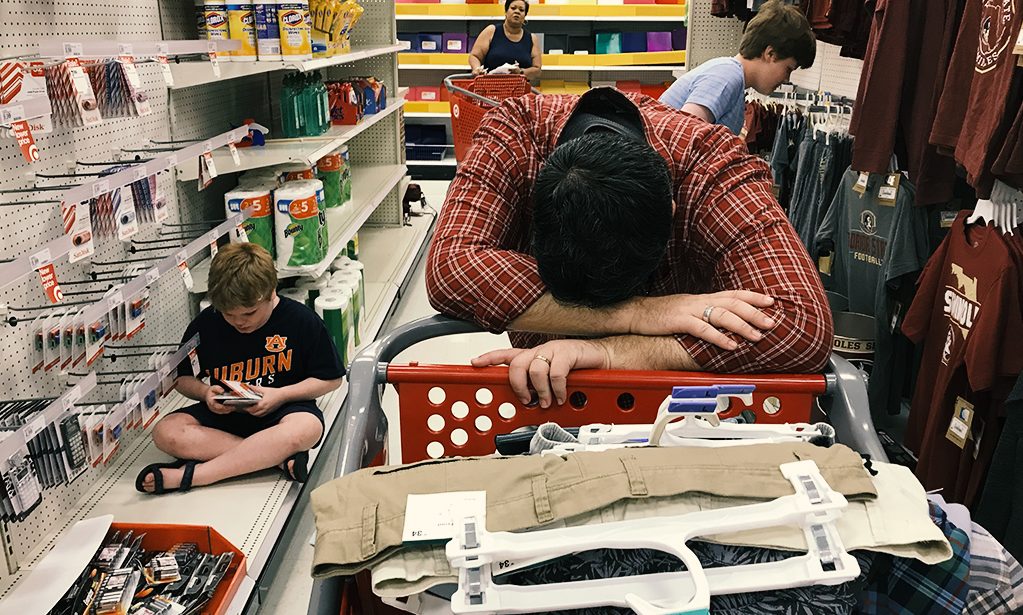 You know, marriage and motherhood is a funny thing. If you stick with it long enough, eventually you will experience surreal moments that can best be described as out-of-body experiences. Moments that leave you wondering, “How did I get here? Who am I?”

In my wildest imagination, I would have never believed that one day I would find myself ring-side at a World Wrestling Entertainment (WWE) wrestling match. And yet, that’s exactly how I spent Saturday night.

I would never describe myself as a fan of WWE. In fact, I didn’t know my husband was even remotely interested in it until about 17 years into our marriage. By then, it was way too late for an annulment.

It all started on a cold, wet January evening. Colin hadn’t been able to go outside to play in way too long. In an effort to help him find “something to do,” Jamie pulled him up into his lap by the fireplace and said, “When I was a little boy, I used to watch wrestling with my PawPaw Gayton.” On the iPad, he pulled up classic WWE moments on YouTube with wrestlers even I remembered like Macho Man Randy Savage, Junkyard Dog, and André the Giant.

Colin was fascinated and eagerly pulled his big brother into his excitement. This was the beginning of a torturous next few years of WWE being everywhere I turned. Matches broadcast on television (RAW, SmackDown, SummerSlam, WrestleMania) almost every weeknight. Santa Claus brought WWE play-action rings with a real dinging bell, action figures and replica belts with very realistic gemstones that frequently came unglued and ended up hidden in the carpet- pointy side up.

The boys practiced WWE moves on each other, the center of our living room morphing into “the ring.” At Kindergarten graduation, in front of parents, teachers, and into a microphone, when asked what he wanted to be when he grew up, Colin stood up and put all the other children’s thoughtful responses like a fireman, astronaut, and nurse to shame with his full-throated answer, “WWE Wrestler.” Enthusiasm has waxed and waned through the years, but every year when WWE rolls into the Donald Tucker Civic Center in Tallahassee, FL, we go.

This year, I told the children I would totally understand if they wanted to take a friend. I encouraged them to ask one of their grandfathers. I even offered up my sister as a fun alternative. “But Mom,” whined my child most resistant to change,“it’s a tradition that we all go together.” I acquiesced with a big sigh and closed eyes of acceptance.

To understand the appeal of WWE, one must first understand that the basic storyline (oh yes, there is a storyline) is essentially a theatrical display of good v. evil, complete with alliances and betrayals. There is a good guy who typically looks like your all-American, apple-pie eating, muscle machine pitted against a bad guy. The bad guy is every bit a stereotype, too. Dressed in black or blood-red, he is a menacing presence. Typically, he snorts a lot and bares his teeth. Sometimes the bad guy wins, but almost always good prevails.  There are women, too. Same storyline.

It is essentially modernized folklore, but with lots of glitz and glamour, flash pans, strobe lights, and the occasional disco ball. And copious amounts of baby oil and body glitter.  Also lots of hair weave. And false eyelashes. And some unlucky someone somewhere is applying bikini wax to everyone’s everything.

Second only to NASCAR races, I will give WWE credit for providing world-class people watching. Sitting close to us on Saturday, for example, I was mesmerized by an older man and a fellow I assumed was his son. They were invested: WWE hats, WWE shirts, beers in WWE commemorative cups. I wouldn’t have been surprised in the least if one of their tattoos had something to do with WWE, but I didn’t get close enough to see clearly.  They were grownups without children who had completely bought in. If told that this entire production was staged, they would have responded with eyes wide in disbelief, “Like hell !”

Their agitation was palpable when Jinder Mahal, who is probably from somewhere like Lincoln, Nebraska, but whose storyline has a lot to do with his being from the “East” (don’t get me started) was announced.  I thought those two were going to come out of their skins. There was lots of angry “USA” chanting. They pumped their fists in the air and the son said things like, “I wish they’d let me up there. I wish they would.”

In the last few years, there’s been an uptick in the attendance of young girls, clear fans of the “Divas,” who look exactly like they sound. With their barely-there outfits and wrestling moves that look like they were choreographed for a stripper pole, I’m not sure they are necessarily the best example for the little girls, but what do I know? The kids love ’em, so who am I to judge?

Jack and Colin get emotionally involved in the matches, even though they are fully aware of the realities of what they are seeing. One of the tenets of theater is to allow the audience to suspend their disbelief, and these folks do an incredible job. Last year, when the fella’s tooth came flying out of his mouth, my disbelief was definitely and totally suspended.

This weekend, Jamie and I decided to kill two birds with one stone.  Not only would we take our children to WWE on Saturday, but also back-to-school shopping on Sunday afternoon.  We would make it an end-of-summer treat for the boys. We’d surprise them with a hotel stay. They could play in the hotel pool Saturday before wrestling and again Sunday before we headed out for brunch and new school supplies.

Jack and Colin begin school on Monday.  Like all summers, this one has flown by, and now we find ourselves staring down the tracks at a back-to-school locomotive with its big spotlight shining down on our family of four.  We just stand there, stock-still. We still have on our swimmies and flip-flops. Our hair is still wet. We have hotdogs in our hand, sipping on one last Icee. Clearly, we’re not ready to let go.

I’ve always loved, loved, loved back-to-school shopping.  Hope and promise radiate from shelves full of new notebooks and loose leaf paper.  Bins of color crayons and index cards and colored pencils and glue sticks yearn to be put in a buggy and then organized into pencil and book bags.  Lunchboxes and thermoses smile with their new-ness and super clean insides. The boys are skeptical.

I tried to explain to them that going back-to-school signals a fresh start, a new year, wide-open opportunities, and the idea that anything is possible. Jack asked, “You can get all of that by the way a new notebook smells?”  Yes. Yes, I can.

Mama and Daddy always made a big deal out of back-to-school shopping.  It was at least a day-long production. We always tried to buy clothes we could mix and match.  A cute skirt that we could wear with multiple tops. Shorts and jeans. A casual dress that we spiffy up or down.  Always a new pair of shoes, a book bag, and a lunchbox. Always a haircut.

Jack and Colin are not as enamored with back-to-school shopping.  They don’t have lots of opinions on clothes. We usually start at Target, because I refuse to put a lot of money in a name brand when I know it’s going to get sweated in, worn on the playground, have ice cream dripped on it and/or thrown on a changing room floor right before sweaty and stinky PE.

Jack showed a little more interest this year, so I enjoyed helping him pick things out.  Colin could have cared less. There was a lot of whining. An occasional foot-stomp and pouty lip followed by several timeouts right in the middle of Target (because you can’t cut a switch in public) and lots of frustration about flat-front pants.  Finally, after picking out three pairs of shorts and three matching shirts, Colin declared “enough.”

I was so excited to get to the school supply part, I could hardly stand it.  But knew I was in trouble when Jamie casually inquired, “How long do you think this part will take?” I was losing him.

“Not nearly as long as that WWE match,” I winked and smiled, ever the optimist.  I looked at pencils and erasers, graph paper and notebooks. Jack asked for mechanical pencils, not the standard #2.  He didn’t want to buy binders yet, because he wasn’t sure if his teachers would want a specific kind. We looked through all kinds of pencil bags.  I secretly longed to buy a new lunchbox just for me. When I asked Colin about his supplies he said, “Mom. I’m pretty sure we’ve got everything we need.  Can I just sit down a minute?”

By that point, even Jamie was running out of gas.  He’s not a fan of shopping in the first place. “Babe, I don’t think we are going to find a lunchbox with a thermos like the one you’re looking for.  Let’s just go. I’ll let the boys pick one out at Amazon. You know they deliver,” he was persuasive. “My back is killing me. It’s probably these floors.  How much longer is it going to take to decide on a pencil bag?” he whined. Finally, after discussing the merits of both an 8”x11” and a 6”x7” planner with my fourteen-year-old, Jamie declared, “Ok.  We’ve done all we can do. I’m tired. The boys are tired. It’s time. I’m calling it. Anything else we need, we can get online. Ok?” I relented.

I maneuvered our cart around other Mamas who were dragging their lackluster children into the cheerful back-to-school section.  I bounced along to the front, undaunted by my three exhausted and whining foot-draggers. As we stood in line, I fought off the appeals for gum, candy and the inevitable, “Something to drink, please!  Do you want me to die right here…of thirst?!” I paid for our loot, and we made our way through the hot parking lot. It was only about 4pm, and yet, I was already hearing rumblings from the little one, “I’m hungry.  Is anyone else hungry?”

Jamie put the bags in the back.  I helped Colin with his seat-belt that always wants to catch.  I had told Jamie I would be happy to drive because he’d already mentioned his backache.  I started the car, the air-conditioning a Godsend. I put the car into reverse when Jamie, suddenly revived and refreshed said, “Hey guys, it’s only 4 o’clock.  Do y’all want to stop by the bookstore before we head back?”

I guess we weren’t too tired after all.