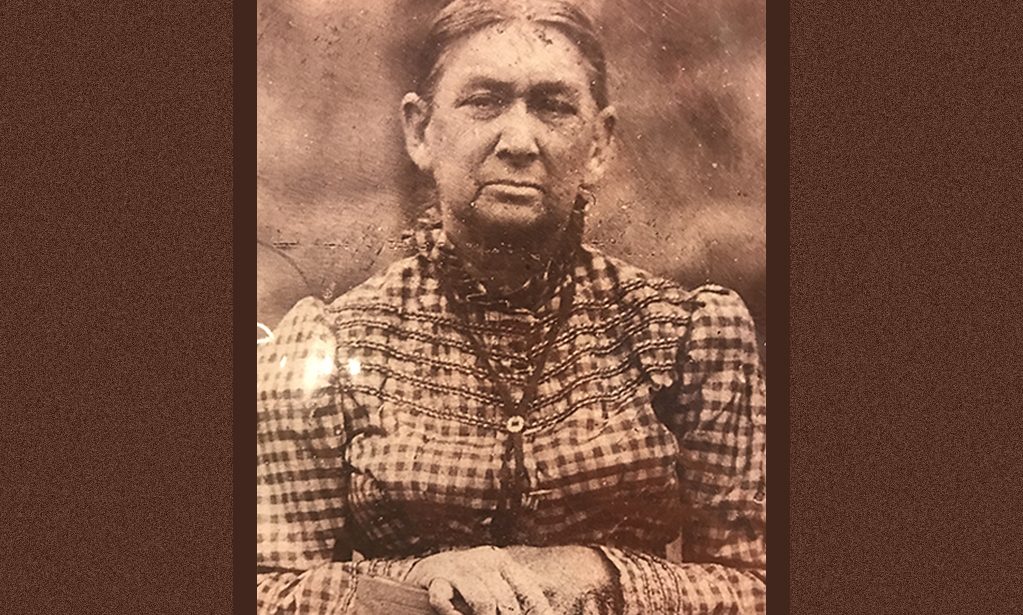 I imagine it was hot.  Summer in south Georgia is something to behold.  Just walking across a yard makes me feel like a lit candle  – melting by degrees.

She sweats through her day dress, big dark circles appear on mousey-brown fabric, soft from washing and washing again.  If there had been a breeze, the wet circles under her arms, across her breasts, and the band soaked around her waistline might have provided some cooling relief, but there was no breeze.  Just oppressive, thick, wet heat. No rain in sight. The dogs rarely left their wallowed ruts under the house, as summer slunk its way into fall.

It was an ordinary day – a day full of chores:  cooking, washing, cleaning, churning, feeding chickens, sweeping yards, tending to hot, fussy children.  An unremarkable day and yet around 140 years later, it’s one of the only stories I know about her.

In my favorite picture of her, thin dark hair is parted in the middle and pulled to the nape of her neck in a bun.  Her face and neck are tan and lined and leathery from decades of working outside. Her thin top lip has only the slightest upturn.  Small and deep within their sockets, her eyes are dark marbles, the kind you don’t worry about losing. The pinky finger on her right hand is crooked, a trait that traveled through her daughter Martha and on to my grandfather, and if I’m remembering right, my first cousin Donnie, too.

For Annie Elizabeth Hudgins Morgan, life was hard.  There were very few niceties. No real splurges. She was the second wife of my great-grandfather, Tom.  The matriarch of the start-over family, she was the woman who came after: after the not knowing, after his decision to abandon a battle in Pennsylvania that took over 46,000 lives in three days and start walking home, after disease robbed him of his first wife and a daughter, after the end of The War.

She had to have known what she was getting when she married Tom Morgan.  This man, her first cousin, who came to his family in Baker County, Georgia, looking to start over with his only surviving child, a little girl named Carrie.  He was soul weary, had night-terrors, and was fiercely protective of Carrie. An excellent woodworker and shingle-maker, he knew how to work the land, too.  There had to have been a glimmer of hope in him. They married the next time the traveling preacher came through, and together had seven children: five girls and two boys.

Everybody for miles around knew to call on Grandma Anne if they needed doctoring.  She knew plants and herbs, how to stitch up a wound, how to treat an infection. When two of their daughters contracted typhoid, she used every home remedy she knew to save them but lost one anyway.  At thirteen, Emma died and was buried in what was a brand new family cemetery, close enough Anne could look out beyond the new magnolias Tom had planted in their front yard and see her daughter’s grave.

The matter at hand on this hot day in 1880, was that someone was stealing her chickens.  For weeks, It had been a thorn in her side. First, she noticed a drop in the number of collected eggs.  She could count on between ten and fifteen eggs a day, and she needed every one. In the last few days though, she was getting only seven or ten if she were lucky.  She’d blamed it on the heat until she noticed her young banty hen was missing.  It was the one she always looked for, the one with feathers more red than brown with just a dusting of black on her breast like she’d powdered herself in smut left under the big, heavy, cast iron wash pot at the corner of the yard.

Annie knew no animal had gotten her.  She was looking for a thief.

The children had been in bed for a long time, worn out from a hot walk home after bringing home a mess of bream for their supper.  Two days before, it was her eldest, Bob, that she’d heard calling for her across the empty hay field. She’d snatched the rifle from above the back porch door and met him on his way up to the house.  The children had caught an alligator down by the creek and tied him up until they could get the gun to shoot him. Fresh alligator tail fed the whole family with some leftover.

She was proud of her children.  Scrappy and scrawny, they knew how to provide:  persimmons from the woods, fish from the creeks on either side of the house, dove, quail, squirrel, deer every now and then, wild blackberries.  Her children were smart and sure and strong. She wasn’t one to lavish them with affection but didn’t swat their hands away from her apron when she was rolling biscuits.  They looked after each other, did their chores without much reminding.  Besides, Carrie kept close to them like a mama cat does her kittens.

Anne kept their clothes clean, read them scripture in the evening, made sure they’d washed their feet before climbing into their beds.  Discipline was swift, but not severe. Tom couldn’t bear to hear the children cry, so they rarely did.

She was running over in her mind the things that needed doing at dawn when over the buzz of cicadas and near constant hum of mosquitoes, she heard her chickens at the back part of the yard. A flutter at first and then only a quick call.  It was just for a moment, but it was enough.

Mending a worn spot on a pair of her son Jim’s trousers with a remnant from a flour sack, she sprang up so quickly from the curved wooden rocking chair, she didn’t allow it the customary squeak that the children recognized from their beds as their mother’s nightly pause before they heard her footsteps across the wooden floorboards on her way to bed.

Standing still, she cocked her head only for a moment.  Then, took sure steps toward the back door. She reached up above the top of the door and took down her rifle.  It was light, small and felt sure in her hand. She didn’t have to check to see if it was loaded, she knew it was.  She’d loaded the birdshot herself, while she was waiting.

With one quick motion, she swung the screen door wide with her hip and brought the sight up to her eye.  The moon illuminated the yard in blue-black ink. In a second, she saw the shadow and pivoted on the heel of her right boot just in time to make the shot.

As quickly as she shot, the scream filled the yard.  Startled out of sleep, the children came running from their beds to the back of the house, curls stuck to their foreheads with sweat.  Bob ran past her, barefoot and in his nightdress, out to the garden where muffled cries could be heard over the wilted tops of turnips.  She warned her son to be watchful as she stood on the porch, gun at her waist.  Tom joined her at the top of the steps.

They all recognized the man’s scream.  A neighbor, she’d not aimed to kill him.  Frustrated, she walked back to the house to start a kettle of boiling water.  She’d be the one picking lead out of his behind, too.

It was Martha who ran back to her mother’s bedroom to get the medicine kit, a worn carpet bag with wooden handles.  Kept folded in the bottom drawer of her chiffarobe, it didn’t hold too much – a few sewing needles, some string Doc Twitty had left her especially for stitches, a few small glass vials of medicine, a syringe, bandages.

She didn’t have to chastise him for stealing the chicken.  He was embarrassed and ashamed as he stood bent over the back of a straight chair that had been brought out to the back porch.  She picked out the bloody buckshot, doctored the sores, bandaged what needed it.

It was after he’d fastened his belt that she caught his elbow and turned him to face her.  She locked eyes with him, those dark marbles flickering now in the orange glow of a kerosene lamp turned up high on the table and smoking its glass chimney.  In a deep-voiced whisper and through gritted teeth, she told him, “You understand. Next time, I’ll kill you.”